An astronomer working at the University of Hawaii captured the first ever pictures of a planet forming around a star. 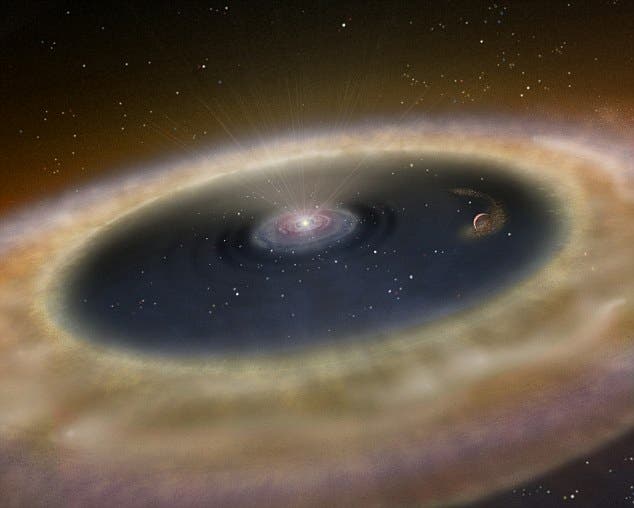 In order to do it, he used the 10-metre Keck telescopes on Mauna Kea and a system of mirrors; the main problem with taking pictures such as these ones is that the planet’s star usually outshines the planet, so there is a need to obstruct the starlight.

The protoplanet, or planetary embryo, was named LkCa 15 b; the hot mass of dust and gas will become a giant, much like Jupiter and Saturn. It is currently the youngest planet ever found.

‘LkCa 15 b is the youngest planet ever found, about 5 times younger than the previous record holder,’ said Adam Kraus, who made the discovery. ‘This young gas giant is being built out of the dust and gas. In the past, you couldn’t measure this kind of phenomenon because it’s happening so close to the star. But, for the first time, we’ve been able to directly measure the planet itself as well as the dusty matter around it.’

Upon analyzing images at different wavelengths, researchers were surprised by the complexity of the phenomenon.

‘We realized we had uncovered a super Jupiter-sized gas planet, but that we could also measure the dust and gas surrounding it. We’d found a planet at its very beginning,’ said Kraus.