No Result
View All Result
HomeScienceAstronomy

The planet in case is 55 Cancri e, and it’s 60 per cent larger in diameter than Earth but eight times as massive, which makes it twice as dense as Earth, and almost as dense as lead.

Generally speaking, planets come in two flavours: rocky earth-like planets, or gas giants (take Jupiter as an example). Our planet is also denser than you’d think at a first glance (5.51 grams per cubic centimeter), due to the immense pressure in the mantle and in the corse.

Rocky planets are made mostly out of silicate rocks and/or metals, and their density can vary greatly. If we take the rocky planets in our solar system for example, Mercury has a density of 5.4, Venus 5.2, and Mars only 3.9 (again, grams per cubic centimeter). If we are to talk in masses, the Earth weighs about as much as all the other rocky planets put together.

55 Cancri e is located about 40 light years from Earth, and it orbits a star extremely closely; so close that in fact its whole year is only 18 hours long.

“You could set dates on this world by your wrist watch, not a calendar,” says UBC astronomer Jaymie Matthews.

Due to its proximity to the star, temperatures on the planet rise to about 2700 degrees Celsius.

“Because of the infernal heat, it’s unlikely that 55 Cancri e has an atmosphere,” says lead author Josh Winn of MIT. “So this is not the type of place where exobiologists would look for life.”

However, even though 55 Cancri e isn’t of interest for exobiologists, it is of interest to astronomers and astrohysicists, who will definitely be “visiting” it in the nearby future.

“The brightness of the host star makes many types of sensitive measurements possible, so 55 Cancri e is the perfect laboratory to test theories of planet formation, evolution and survival.”

Even though the planet isn’t visible, even with a telescope, the star will be visible with the naked eye for the next two months, if the nightsky is clear. 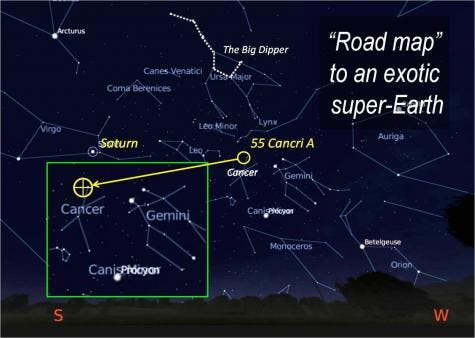 “It’s wonderful to be able to point to a naked-eye star and know the mass and radius of one of its planets, especially a distinctive one like this”.

It combines the raw processing power of neural networks with human-like concept recognition.