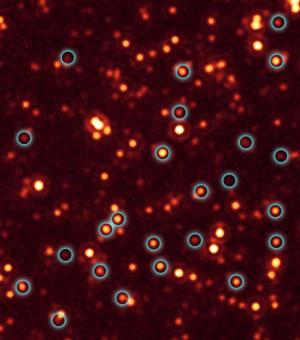 A black hole is a weird and fascinating thing. There are few things we know about them. Astronomers are studying them round the clock and they job is made easier by the fact that they have unmasked hundreds of black holes hiding deep inside dusty galaxies billions of light-years away.They are massive and growing and they have been discovered by NASA’s Spitzer and Chandra space telescopes. They represent a large part of the long-sought missing population. Their discovery implies there were hundreds of millions of other blackholes growing in our young universe, more than doubling the total amount known at that distance. “Active, supermassive black holes were everywhere in the early universe,” said Mark Dickinson of the National Optical Astronomy Observatory in Tucson, Ariz. “We had seen the tip of the iceberg before in our search for these objects. Now, we can see the iceberg itself.” Dickinson is a co-author of two new papers appearing in the Nov. 10 issue of the Astrophysical Journal. Emanuele Daddi of the Commissariat a l’Energie Atomique in France led the research.This supports the fact that a big part of the massive galaxies in the distant universe spent their youths building monstrous black holes at their cores. For years the search for a large population of active black holes was led with few results. hese highly energetic structures belong to a class of black holes called quasars. A quasar consists of a doughnut-shaped cloud of gas and dust that surrounds and feeds a budding supermassive black hole. As the gas and dust are devoured by the black hole, they heat up and shoot out X-rays. Those X-rays can be detected as a general glow in space, but often the quasars themselves can’t be seen directly because dust and gas blocks them from our view. “We knew from other studies from about 30 years ago that there must be more quasars in the universe, but we didn’t know where to find them until now,” said Daddi.

This is going to give us important clues in finding out how massive galaxies evolve. “Theorists thought that mergers between galaxies were required to initiate this quasar activity, but we now see that quasars can be active in unharassed galaxies,” said co-author David Alexander of Durham University, United Kingdom. “It’s as if we were blindfolded studying the elephant before, and we weren’t sure what kind of animal we had,” added co-author David Elbaz of the Commissariat a l’Energie Atomique. “Now, we can see the elephant for the first time.”. Their results give answers but they raise further questions about the dynamic of the universe and galaxies.