We have a shuttle in outer space, orbiting and asteroid and beaming back data and images. Still seems pretty incredible.

by Mihai Andrei
in Astronomy, Space
Reading Time: 3 mins read
A A
Share on FacebookShare on TwitterSubmit to Reddit

Although Bennu is only slightly larger than the Empire State Building, it’s already turning out to be even more intriguing than we thought it would be. For starters, it appears to contain minerals dating from the earliest days of the solar system, which could offer astronomers valuable insights into how the system formed and evolved through the eons.

It also appears to be rife with water-containing (hydrated) minerals. This will allow researchers to study the hypothesis that Earth and other planets in our solar system were “fertilized” by water-rich asteroids. Bennu also appears “craggier” than expected — the rocky structures on its surface came as a surprise to NASA.

Based on Earth observations, astronomers were expecting a relatively smooth surface, but images from OSIRIS-REx show that the asteroid is riddled with rough boulders. The boulders also appear to be denser than expected, raising concerns about the spacecraft’s ability to drill and extract samples. NASA engineers, however, are confident.

“Throughout OSIRIS-REx’s operations near Bennu, our spacecraft and operations team have demonstrated that we can achieve system performance that beats design requirements,” said Rich Burns, the project manager of OSIRIS-REx at NASA’s Goddard Space Flight Center in Greenbelt, Maryland. “Bennu has issued us a challenge to deal with its rugged terrain, and we are confident that OSIRIS-REx is up to the task.”

But perhaps the most stunning discovery is that Bennu is still active, spewing giant plumes of matter. 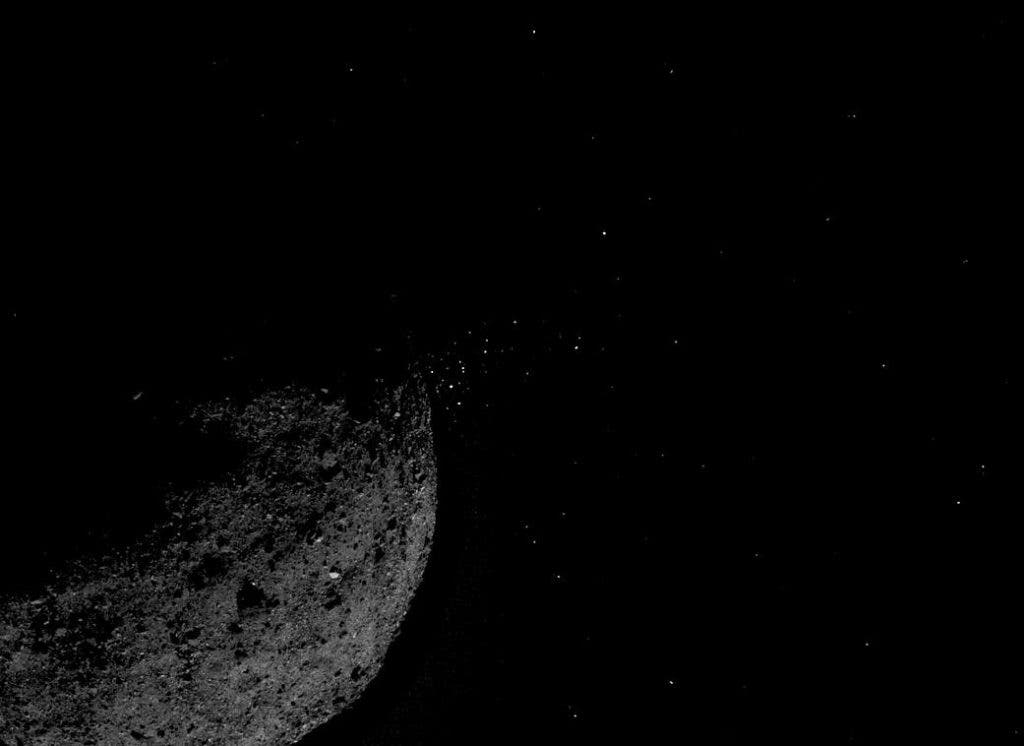 This view of asteroid Bennu ejecting particles surprised astronomers. The photo was created by combining two images taken onboard NASA’s OSIRIS-REx spacecraft. The features have been accentuated through processing techniques such as cropping and brightness and contrast adjustment. Credits: NASA/Goddard/University of Arizona/Lockheed Martin.

“The discovery of plumes is one of the biggest surprises of my scientific career,” said Dante Lauretta, OSIRIS-REx principal investigator at the University of Arizona, Tucson. “And the rugged terrain went against all of our predictions. Bennu is already surprising us, and our exciting journey there is just getting started.”

The plumes consist of dirt and rock, but their source is not yet known. OSIRIS-REx is hard at work to help answer that question.