by Dragos Mitrica
in Archaeology, Biology, News
A A 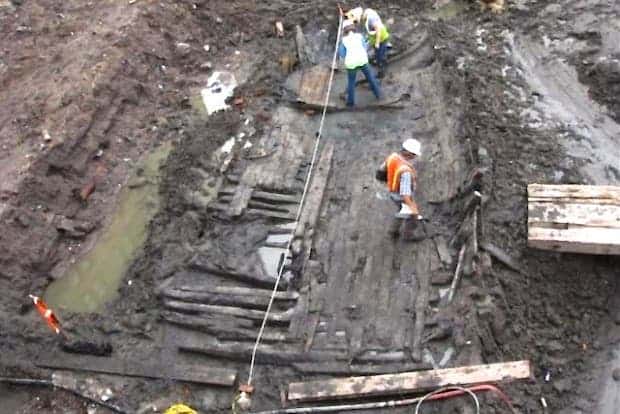 When the huge reconstruction work began at the World Trade Center following 2001’s tragedy, constructors uncovered something no one was expecting to find there – a wooden ship, right under where the twin towers used to stand.

Measuring 22 feet (6.7 meters), the skeleton of the ship went unexplained for years. Now, scientists analyzing the rings from the trees used as wood showed that it was built sometime in 1773 or soon after that, probably in a small shipyard in Philadelphia. To make it even more interesting, it was probably constructed using the same white oak trees used to build parts of Independence Hall, where the Declaration of Independence and U.S. Constitution were signed.

How they figured it out

Archaeologists have carefully monitored the entire building site. Among others, they found animal bones, bottles, ceramic pieces, and of course, the ship. Piece by piece, it was carefully extracted from the ground and sent to the Maryland Archaeological Conservation Laboratory where it was soaked in water, to prevent the wood from cracking or breaking. After this, it was sent to the Tree Ring Laboratory at Columbia University’s Lamont-Doherty Earth Observatory in Palisades, New York. There, researchers cut thin slices and analyzed the tree rings.

In order to determine when the trees were cut and from where, they used a technique called dendrochronology. Dendrochronology is the scientific method of dating based on the analysis of patterns of tree rings, also known as growth rings. After they establish how old the trees are, they then compare the rings to other previously studied rings from trees in other areas, checking for similarities.

“What makes the tree-ring patterns in a certain region look very similar, in general, is climate,” said the leader of the new study, Dario Martin-Benito, from the Swiss Federal Institute of Technology (ETH) in Zurich. “Regional ring patterns arise from local rain levels and temperatures, with wetter periods producing thicker rings and drier periods producing smaller rings”, he added.

He and his colleagues narrowed the place of tree origin to the eastern United States. Their search was aided by the keel of the ship, which contained hickory, a tree found only in eastern North America and eastern Asia – and eastern Asia was not really a possibility. If the trees had been more common, the search would have been more difficult.

The tree ring growth patterns were very similar to those previously obtained from rings found in old living trees and historic wood samples from the Philadelphia area.

“We could see that at that time in Philadelphia, there were still a lot of old-growth forests, and [they were] being logged for shipbuilding and building Independence Hall,” Martin-Benito told Live Science. “Philadelphia was one of the most — if not the most — important shipbuilding cities in the U.S. at the time. And they had plenty of wood so it made lots of sense that the wood could come from there.”

There are two main theories as to how the ship got there in the first place. Either it simply sank accidentally or it was purposely submerged to become part of a landfill, to strengthen Manhattan’s coast line.