by Alexandra Gerea
in Archaeology, News, Videos
A A

Sure, we’ve all heard of Egypt’s pyramids, but have you heard of Sudan’s pyramids? Well, you really should have – they’ve survived in the African desert for 3,000 years, and they’re absolutely spectacular, as we can all see, thanks to this National Geographic drone footage. 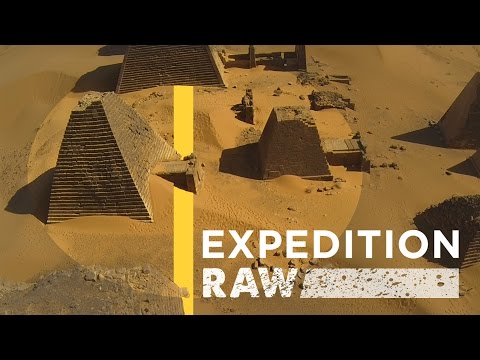 These pyramids were built by Nubians, the rulers of the ancient Kushite kingdoms. The Kushites were an ancient African kingdom situated in today’s Sudan. Approximately 255 pyramids were constructed over a period of a few hundred years to serve as tombs for the kings and queens of the area, though they are much smaller than the Egyptian ones.

All of the pyramid tombs of Nubia were plundered in ancient times and all of the jewelry and valuable possessions were stolen; however, archaeologists have discovered bows, quivers of arrows, archers’ thumb rings, horse harnesses, wooden boxes, furniture, pottery, colored glass, metal vessels, and many other artifacts which helped them date and frame the pyramids into a historical context. But we still have much to learn about them, and this footage definitely helps:

“The best part with the helicopter is I can fly over and gain this connection between all the other burial sites, between the pyramid and the temple, and get an understanding of what that is from the air,” National Geographic Society engineer and drone pilot, Alan Turchik, explains in the video above.