Stonehenge might have been built in Wales, new evidence suggest

Despite it being studied for many decades, there are still many things we don’t understand about the Stonehenge. Scientists have now identified the original quarries where the bluestones were mined:  225 km away in Wales, and 500 years before the Stonehenge was built! This could indicate that perhaps a proto-version of the Neolithic monument could have been built in Wales – taken apart and then reconstructed in England five centuries later. 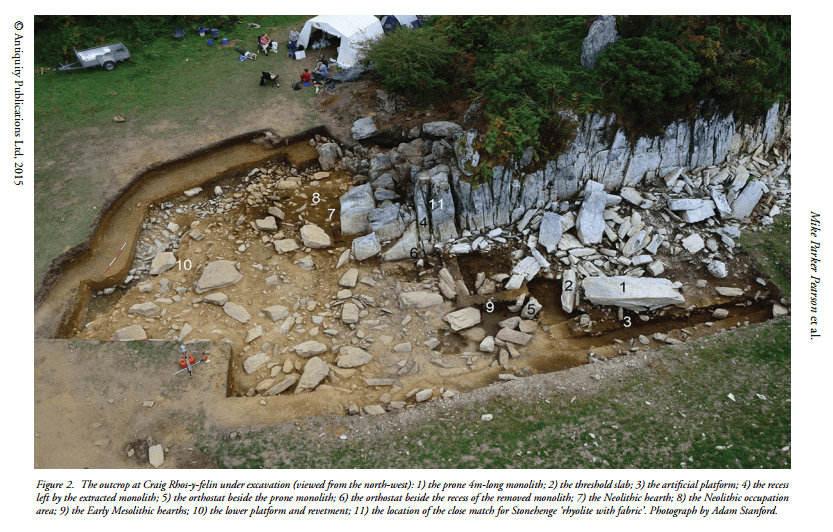 Not all the rocks in the Stonehenge are similar; some of the smaller monoliths, called bluestones, come from Wales, but until now, we didn’t know exactly where in Wales. Now, a mixed team of geologists and archaeologists has identified a series of holes in rocky outcrops that perfectly match the shape, structure, and size of Stonehenge’s ones. Bluestones is actually a generic term which in this case is used to refer to dolerite and rhyolite, two volcanic rocks. According to the latest study, these rocks originate in Carn Goedog and Craig Rhos-y-felin in the Preseli Hills in Wales. But this is where the mysteries start piling up.

The bluestones were mined in Wales, but the sandstones were mined in England, and the two were brought together – across over 200 kilometers. But there’s even more: the dates don’t match either. Researchers used radiocarbon analysis on burnt hazelnuts and charcoal left over from the workers’ camp fires, and found that the stones were mined long before they were used to build Stonehenge. It just doesn’t fit if it was all put together in one stage.

“We have dates of around 3400 BC for Craig Rhos-y-felin and 3200 BC for Carn Goedog, which is intriguing because the bluestones didn’t get put up at Stonehenge until around 2900 BC,” said lead researcher Parker Pearson from University College London.

“It could have taken those Neolithic stone-draggers nearly 500 years to get them to Stonehenge, but that’s pretty improbable in my view,” he added. “It’s more likely that the stones were first used in a local monument, somewhere near the quarries, that was then dismantled and dragged off to Wiltshire.”

But the study, which was published in the Journal Antiquity, also provides insight onto how the rocks could have been transported from one place to the other.

“They only had to insert wooden wedges into the cracks between the pillars and then let the Welsh rain do the rest by swelling the wood to ease each pillar off the rock face,” explains one of the researchers, Josh Pollard, from the University of Southampton. “The quarry-workers then lowered the thin pillars onto platforms of earth and stone, a sort of ‘loading bay’ from where the huge stones could be dragged away along trackways leading out of each quarry.”

While previous studies have suggested that stones were taken southwards from the hills to Milford Haven and then floated towards Wiltshire on boats or rafts, this new finding almost completely negates that possibility.

“The only logical direction for the bluestones to go was to the north then either by sea around St David’s Head or eastwards overland through the valleys along the route that is now the A40,” said Pearson. “Personally I think that the overland route is more likely.”

If Stonehenge was indeed a Welsh monument in the first place, then finding its original site could be monumental in understanding it and its purpose – and this is exactly what the team plans to do in 2016: continue study at the quarry, and look for the original Stonehenge.

“Stonehenge was a Welsh monument from its very beginning,” said Pearson. “If we can find the original monument in Wales from which it was built, we will finally be able to solve the mystery of why Stonehenge was built and why some of its stones were brought so far.”