by Tibi Puiu
in Archaeology, Studies 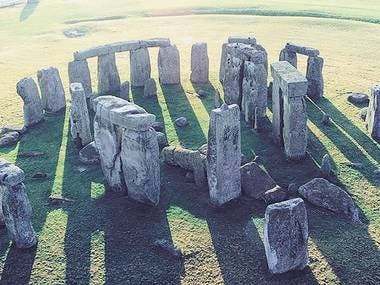 In a remarkable find, archeologists have uncovered two ancient pits, perfectly aligned with the sun’s natural summer cycle. These suggest that the Stonehenge site was a place for sun worship at least 500 years before the first stone was erected.

Archaeologists  from the universities of Birmingham, Bradford  and Vienna were involved in an on-going survey work around Stonehenge, where they scanned the surroundings using ground-penetrating radar and other geophysical investigative techniques. What they came across was more than any of them could have expected.

Two large pits were unearthed, one faced towards the enclosure’s eastern end, the other nearer its western end, aligned according according to the sunrise and sunset, respectively, of the summer’s longest day – the summer solstice. By no means could had this be considered a coincidence. These pits may have contained stones, posts or fires to mark the rising and setting of the sun, as well as  forming a procession route along the Cursus (the pre-historic enclosure around the site) for ancient rituals celebrating the sun moving across the sky at the midsummer day. A gap at the edge of the site was also found, most likely serving as an entrance or exit to the procession site.

The sun was an important part of the local natives’ culture living more than 5000 years ago, its rising and falling becoming a central part of their lives. The discovery of the Cursus pits, pre-dating the erected stones, shows that the site at Stonehenge was sacred long before than previously thought.

This is a remarkable discovery, but by all accounts, it seems like Stonehedge has a load of other secrets left to reveals, most maybe buried forever. The University of Birmingham  Stonehenge area survey is the largest of its kind so far, and will take another two years to complete. The breakthrough we’ve been waiting for may be at reach, soon enough.