The findings are comparable to Hadrian’s Wall, which separated Roman England from the ‘wild’ Scotland.

Walls seem to be a hot topic these days, though their purpose hasn’t really changed much across the centuries. Their straightforward purpose is to keep people out. People built walls around their huts, around their churches, their towns, and even their countries. Back then, it wasn’t so much about keeping immigrants out, as it was about defending from invaders. The Romans built a massive wall in northern England. Hadrian’s Wall has inspired countless myths and legends, including the great Wall from Game of Thrones. But for the Romans, the wall was a very practical investment which served to protect the edge of their empire from Scottish pillaging raids and invasions.

Even Hadrian’s Wall pales in comparison to the Great Wall of China. Several walls were being built as early as the 7th century BC in China, for defense and to serve as border control. Those bits and pieces were maintained, enhanced, and ultimately connected. The Great Wall reached its greatest form during the Ming Dynasty (1368–1644).

Well, the select club of epic walls might get another addition: the Siberia Wall in the Altai Mountains. 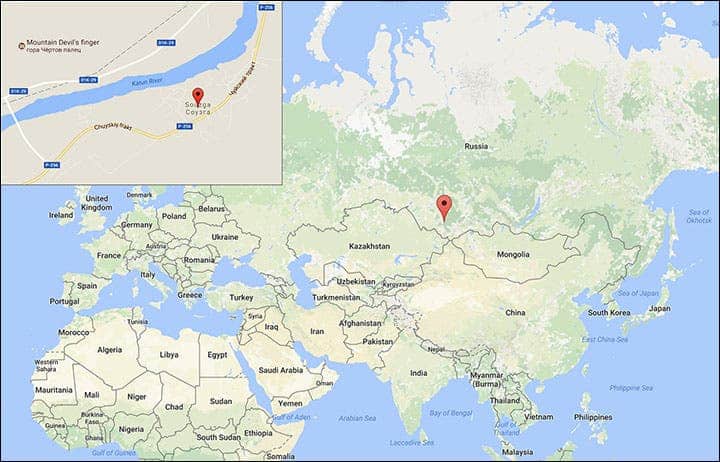 Today, the wall system is barely visible, but it must have been truly humbling in its time. Professor Andrey Borodovsky, an archaeologist working in the Altai Mountains in eastern Russia, says that it measured eight meters high, and had a width of ten meters.

‘To the east of these walls is a fairly wide passage, which is limited at the mountainside by another series of walls, oriented west-east across the Katun valley,’ he said.

Just on a single hillside, he found nine adjacent walls, connected in a rampart system. At the moment, it’s unclear who built the system, though Borodovsky believes that based on their structure, the walls were more a Trump-style border control than a Roman defense system.

‘These walls were clearly made to cut off crowds of people, and make them go through a narrow passage in the direction chosen by the creators of the (construction).’

The existence of archaeological remnants in the area was known for quite a while. However, much of the wall system was destroyed by the construction of the Chuya highway in tsarist times. Later on, Stalin continued work on the highways using prison labor — and destroyed even more swaths of archaeological walls. The expansion of the modern-day village Souzga village also took its toll, leaving only stumps of the walls’ former glory. But even so, what’s left is impressive.

The problem is that the entire system is covered by turf, to the point where it’s barely visible to the naked eye. Sattelite imagery also doesn’t help that much, so Borodovsky used geophysical techniques — especially a method called resistivity.

In Electrical Resistivity Tomography (ERT) current is pumped into the ground through electrodes, and measured on other electrodes. Based on this measurement, characteristics of the underground can be assessed, and man-made material can be separated from natural soil and rocks (to some extent). He also used seismic methods, where an earthquake-like wave is created, and information can be derived based on its reflection captured at a sensor.

‘Geophysics has clearly confirmed that the Souzga walls were artificially created,’ he told The Siberian Times.

‘It is not very easy to determine the age of such constructions, when exactly were they created, but I believe it was around the first millennium BC – the beginning of new era. That is Iron Age or even Bronze Age, but more likely – Iron Age.’

‘I’m basing this on the fact that it was the time when such constructions are created all over the world, for example the famous Hadrian’s Wall also fits into this trend.’

The problem is that what little has been found on the surface has been dated to medieval times. But Borodovsky believes the medieval people only built on top of the ancient walls and didn’t create them from scratch. He says that medieval people wouldn’t have had the interest or the money for such a massive project.

There’s also a matter of historical coherence which supports his assumption. Many important Eurasian defense lines date from the beginning of the first millennium BC up to a few hundred years in the Current Era. Borodovsky explains:

‘Such a fortification process was due to a number of factors. First, the appearance of significant human resources in this era, thanks to the potential of an integrated manufacturing economy. Secondly, the aggravation of military conflicts and a significant increase in their scale. Thirdly, the formation of large state and proto-state entities, which had economic, cultural and political boundaries and these boundaries … to separate their world from aliens.’

It also remains to be seen what culture created this magnificent defense line. Among the suspects are ancient people such as the Pazyryk culture, a Scythian Iron Age culture, who buried mummies in long barrows (or kurgans) and seemed to have a flourishing civilization from the 6th to 3rd centuries BC.