Early ancestor is only hominid that ate bark

by Tibi Puiu
in Anthropology, Discoveries
A A

That’s right. Scientists have found that one of our early ancestors, the Aus­tra­lo­pith­e­cus sed­iba, South Af­ri­can spe­cies from two mil­lion years ago, used to have an unique diet of forest fruits and other woodland plants. Basically, all the other hominids, we currently know of, fo­cused more on grasses and sedges. This makes A. sediba a truly unique relative in the evolutionary human tree.

The first fossils of Australopithecus sediba, discovered in South Africa in 2008, were hailed as a remarkable discovery. The hominid was pretty short, even by early human species standards, had long arms, could walk on two legs, despite most likely it still preferred climbing trees and had a very small brain. What’s the position of the Australopithecus sediba in the human lineage, though?

“The question is, is this a great great grandad or grandma or is it a cousin?

“They were eating bark and woody substances, which is quite a unique dietary mechanism; it hasn’t been reported for any other human relative before,” said Dr Louise Humphrey of the palaeontology department at London’s Natural History Museum.

Half-ape/half-human, the Australopithecus sediba was hailed as the missing link, but even now researchers are analyzing its fossils and genetic markup.

These findings were made after scientists an­a­lyzed the A. sed­iba di­et by zap­ping fos­sil­ized teeth, from two individuals, with a la­ser. This allowed the researchers to sample car­bon from the enam­el of teeth, so re­search­ers can pin­point which types of plants the car­bon comes from. Results showed that the A. sediba consumed two groups of plants: so-called “C3” plants like trees, shrubs and bushes, which were preferred by the South African hominid and “C4” plants like grasses and sedges con­sumed by many oth­er early ho­minids. 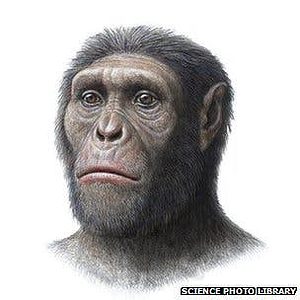 Hey buddy, you got some bark between your teeth.