by Mihai Andrei
in Books
Reading Time: 6 mins read
A A
Share on FacebookShare on TwitterSubmit to Reddit 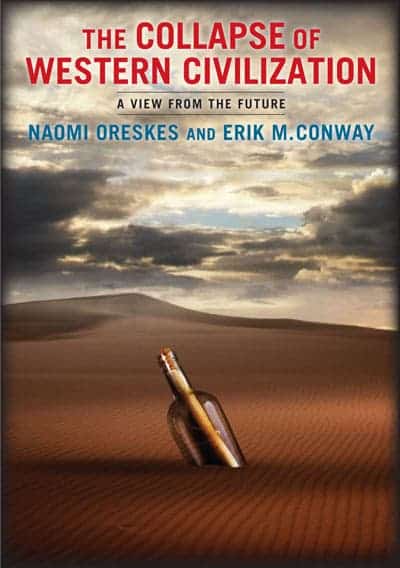 “The Collapse of Western Civilization: A View from the Future”
By Naomi Oreskes, Erik M. Conway
Columbia University Press, 104pp | Buy on Amazon

The year is 2393, and the world is almost unrecognizable. Humanity has had countless warnings, and acknowledged the threat of changing climate, but it failed to act. Soaring temperatures, rising sea levels, wide spread drought and more led to the Great Collapse of 2093, when the disintegration of the West Antarctica Ice Sheet led to mass migration and a complete reshuffling of the global order, with Africa and Australia being basically vanquished. Writing from the Second People’s Republic of China on the 300th anniversary of the Great Collapse, a senior scholar looks back on “the children of the Enlightenment”, the Western civilization and how they [we] failed to act, destroying the world as we know it.

The Collapse of Western Civilization is a haunting and provocative book that analyzes how the world might look like less than 400 years from now if we fail to limit the damage we are doing to the environment. It starts from current climate research and reports, and then develops in a way that only fictional writing can – projecting the future based on what we are seeing today and what we have seen in the past, taking into account some likely developments. The book is quite small, but it’s not a light read. The concepts and implications it deals with are (at least to me) difficult to “digest”, and even though I got through it all in one read, I felt the need to go back and take another look at some passages. The most haunting one for me was:

To the historian studying this tragic period of human history, the most astounding fact is that the victims [us] knew what was happening and why. Indeed, they chronicled it in detail precisely because they knew that fossil fuel combustion was to blame. Historical analysis also shows that Western civilization had the technological know-how and capability to effect an orderly transition to renewable energy, yet the available technologies were not implemented in time.

Let’s make a little thought experiment. Let’s assume this is just some far off world, and they’re doing something to the environment which is bad. They’re polluting, changing the planetary climate, and they know that it’s not sustainable and it will end up badly for them. Why would they not change their ways? It seems absurd, right? Why would you not try to stop doing whatever it is that you’re doing, and try to protect the planet – and yourelf? Now ask the same question for us. In retrospect, it does seem absurd to live in a world like are are now. I could easily imagine a historian writing in 2393 how “the interesting thing about people living in the early part of the 21st century is that they knew what was doing is wrong, but still did it”.

Naomi Oreskes and Erik M. Conway provide a few answers as to why that is happening. Brutally true, this is what they write:

“How did these wealthy nations [..] justify the deadly expansion of fossil fuel production? Certainly they fostered the growing denial that obscured the link between climate change and fossil fuel production and consumption. They also entered a second delusion: that natural gas from shale could offer a ‘bridge to renewables’ “.

The science is clear on this, and I’ll state just one fact here: out of all the peer reviewed articles written on climate change, just 0.17% or 1 in 581 papers are written by climate change deniers. There is no other debate in science that is so one sided – and yet you see both sides get equal time on TV, you see big companies invest huge amounts of money into manipulating people, and a huge gap between who understands the truth and who has the capacity to act on it. In the book, they call it the failure of the free market, and again, they come up with a very solid explanation of today’s situation:

“A key attribute of the period was that power did not reside in the hands of those who understood the climate system, but rather in political, economic, and social institutions that had a strong interest in maintaining the use of fossil fuels. Historians have labeled this system the carbon combustion complex: a network of powerful industries comprised of primary fossil fuel producers; secondary industries that served fossil fuel companies (drilling and oil field service companies, large construction firms, and manufacturers of plastics and other petrochemicals); tertiary industries whose products relied on inexpensive fossil fuels (especially automobiles and aviation); and financial institutions that serviced their capital demands. Maintaining the carbon-combustion complex was clearly in the self-interest of these groups, so they cloaked this fact behind a network of “think tanks” that issued challenges to scientific knowledge they found threatening.”

The desires of the few won against the needs of the many – and this is always a recipe for disaster. Should the current situation continue (or get even worse, as it seems to), we will be dealing with a global crisis – the first of its kind. The dystopian future they paint may very well become reality, and they don’t go easy on the apocalyptic side:

“The human populations of Australia and Africa, of course, were wiped out.”

“In 2023, the infamous “year of perpetual summer” lived up to its name, taking 500,000 lives worldwide and costing nearly $500 billion in losses due to fires, crop failure, and the deaths of livestock and companion animals.”

“There is no need to rehearse the details of the human tragedy that occured; every schoolchild knows of the terrible suffering”.

The only real fault I can find in the book is its size. After finishing it, I found myself yearning for more, especially as they don’t discuss only the environmental and social aspects of the changing environment, but also the economic failures caused by the free market, which didn’t allow governments to make moves for the good of the many.

The book ends with a small dictionary, detailing some of the terms used in the book, and an interview with the two authors. Naomi Oreskes is a professor of the history of science at Harvard University and Erik M. Conway is a historian of science and technology employed by the California Institute of Technology.

This book is not entirely fiction. It’s not even science fiction; to me, it’s somewhere between science and science fiction – it’s drawing inspiration from real, up to date studies and projects them. The way the authors project them is their own choice, but in my opinion, it’s quite a possible and believable choice. The Collapse of Western Civilization is a must read for anyone interested in … heck, it should be a must read for everyone.

Buy The Collapse of Western Civilization at the Columbia University Press.