by Tibi Puiu
in Materials, News, Research, Science
A A

In a synergy between biology and electrochemistry, researchers at MIT cleverly exploited genetically modified viruses to assemble metal molecules into extremely thin nanowires that can be used as cathodes in a lithium-air battery. This type of battery has been thoroughly researched in the past few years and has sparked the interest of scientists because of its tremendous potential to store high amounts of energy per unit size. For instance, such batteries can carry as much as three times the amount of energy per area than a lithium-ion battery, currently the de facto mobile energy storage medium used for everything from mobile phones to notebooks to electric cars.

The MIT researchers specifically genetically designed a virus called M13 which has an inherent affinity for capturing metal molecules from water and binding them together to form structures – he’s quite the nifty builder, too. The team demonstrated that the virus could assemble manganese oxide molecules (a favored material for lithium-air battery cathode) into nanowires as thin as 80 nanometers or about the width of a blood cell.

The process doesn’t construct perfectly smooth wires, which in our case is a good thing. The rougher the surface, the better, since you want as many lithium molecules to come into contact with the cathode material as possible – this way you don’t just have an almost 2D surface for molecules to cling on, but a 3-D one. Also, the viruses naturally produce a three-dimensional structure of cross-linked wires, which provides greater stability for an electrode. Another positive point going to the virus generation method is that unlike conventional chemical manganese oxide assembly methods, which are extremely energy intensive requiring a high temperature environment, the present process can be run at room temperature.

To make the nanowires more electrically conductive and of course provide the cathode with catalysis capabilities, the wires are doped with palladium nanoparticles. Other methods involve making cathode nanowires in bulk materials which translates in a lot of palladium being used, and as you may know it’s a very expensive material.

One of the lead authors of the paper, MIT Professor Angela Belcher, envisions the whole process akin to how an abalone grows its shell —  by collecting calcium from seawater and depositing it into a solid, linked structure. 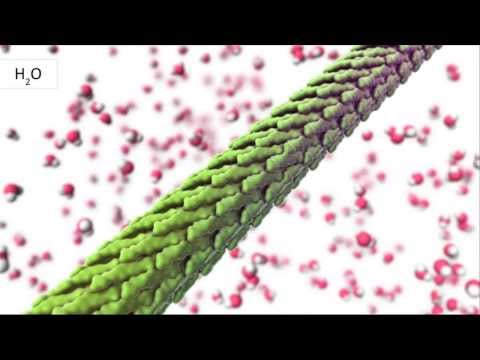 Belcher stresses, however, that their work only details how a cathode could be made for a lithium-air battery. It still remains to be seen how the anode or the electrolyte (the material or solution that allows lithium ions to pass to the anode and complete the electrochemical reaction) will be assembled. A big questions arises, as well. Can this method be scaled? Well, it might be difficult to grow millions of cathode nanowires using viruses alone, but it’s possible that actual manufacturing might be done in a different way. This has happened with past materials developed in her lab, she says: The chemistry was initially developed using biological methods, but then alternative means that were more easily scalable for industrial-scale production were substituted in the actual manufacturing.

The work was detailed in a paper published in the journal Nature Communications.