Quantum computing is still in its infancy, but you can test drive it yourself thanks to IBM.

by Mihai Andrei
in News, Science, Technology
A A

Quantum computing is still in its infancy, but you can test drive it yourself thanks to IBM. They’ve unveiled an online service (access here) which allows anyone – yes, including you – to use its the five-qubit quantum computer erected at a research lab in Yorktown Heights.

Regarded by many as the future of computation, quantum computing is just like conventional computing… except completely different. Both use a type of bits for computing – in conventional machines, bits are represented as 1s or 0s, whereas in quantum computing qubits (as they’re called) can actually have two states at once, taking advantage of a quantum phenomenon called superposition. It’s not only much stronger than computing but better suited to for algorithms that study nature.

“It gives you access to a much broader and larger space of computations,” said Jerry M. Chow, IBM’s Manager of Experimental Quantum Computing Group. Chow is part of the team bringing Quantum computing to the cloud.

This is still a pretty esoteric field of science (as it’s always the case when you mix quantum effects with practical applications), but IBM wants to make it a bit less mysterious. They want people to use the quantum computer and program their own algorithms.

“It’s a web-based platform for public to access to run quantum algorithm and quantum circuits on a real quantum processor in our labs,” said Chow. “We want people to program their own algorithms and learn what it means to do quantum computing.”

Of course, this isn’t your average computer. It doesn’t run Windows or anything like it, and you can only use it for programming algorithms. You have to sign up for an invite, and once you’re in, you see a computing framework, much like a musical staff, with each qubit being a unique line. You can design your own equations and processes and then either simulate them or send them for processing to IBM’s actual quantum hardware. Here’s an example which details how you can design Grover’s algorithm, a quantum algorithm for searching an unsorted database. 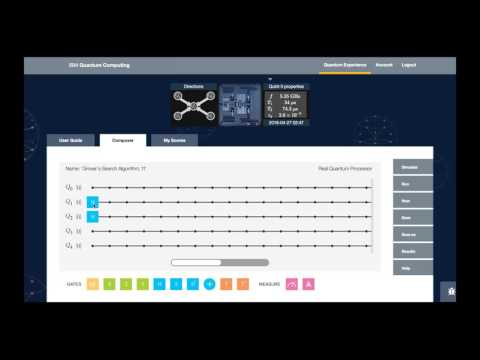 It’s a brilliant way of test driving what could be one of the biggest inventions in modern history. There are also other tutorials and examples I encourage you to try out for yourself. But for more experienced or advanced users, this could be a useful playground to actually test out new ideas and see how they can work.

To put it simply, yes – you can make actual breakthroughs on this cloud.

“For casual, new person to quantum computing, this is where you can learn through examples. For research community and people who know a bit about this, this is a really high-functioning, high-quality system to test out new ideas, write papers and perform research on,” said Chow.