Conventional computers are starting to reach their physical limitations but rest assured - a new technology is being worked on that will take computing to new, unforeseeable heights. 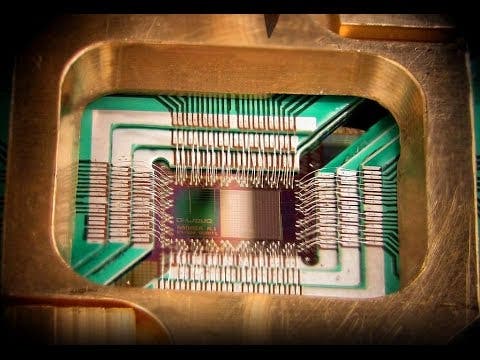 Conventional computers are starting to reach their physical limitations but rest assured – a new technology is being worked on that will take computing to new, unforeseeable heights. That technology is called quantum computing and it takes advantage of quantum phenomena to facilitate faster computations and a faster access to memory. Now, a new study published in Nature Communications showed that even primitive quantum computers (like the ones being built today) could outperform existing machines.

We’ve discussed quantum computers before, and how downright weird they are. A quantum computer is a computation system that makes direct use of quantum-mechanical phenomena, such as superposition and entanglement, to perform operations on data. They are fundamentally different from traditional computers, which are based on transistors.

In its basic principle, digital computers require data to be encoded into binary digits (bits), each of which is always in one of two definite states (0 or 1). Instead of bits, quantum computers use qubits – quantum bits which are in a state of superposition – that is, they exist partly in all its particular theoretically possible states simultaneously and only take a certain value when measured.

The field is still in its infancy but experiments have been carried out in which quantum computational operations were executed on a very small number of qubits. Several organizations claim to be on the brink of creating simple quantum computers, and according to this new study, these machines could at least be competitive, if not overcome existing computers.

Bringing quantum to the macro world

Quantum computers almost sound too good to be true – and in a way, they are. It’s extremely difficult to scale up the technology. It’s easy to built computers from a few qubits, but as soon as you try to scale it up, it breaks down. That’s what everyone’s working on right now, but even very small computers can work wonders.

“An exciting outcome of our work is that we may have found a new example of quantum walk physics that we can observe with a primitive quantum computer, that otherwise a classical computer could not see,” said Dr. Jonathan Matthews of the Centre for Quantum Photonics. “These otherwise hidden properties have practical use, perhaps in helping to design more sophisticated quantum computers.”

The “Quantum walk” he is referring to is the quantum alternative of the Brownian motion, which describes the chaotic movement of particles in a suspension – the “drunken sailor’s random walk” of particles. This means that quantum processors are very good at randomness, which in turn means it can be very effective for some algorithms.

“It’s like the particle can explore space in parallel.  This parallelism is key to quantum algorithms, based on quantum walks that search huge databases more efficiently than we can currently,” explains Xiaogang Qiang, a Bristol PhD student who worked on the experiment.