by Henry Conrad
in News, Space flight, Technology
A A

“It is the most complicated rocket engine out there on the market, but that’s because it’s the Ferrari of rocket engines,” said Kathryn Crowe, RS-25 propulsion engineer.

The 2020 mission will be NASA’s biggest and most ambitious since Apollo 11’s landing on the surface of the Moon in 1969 – that’s a big statement to NASA’s commitment to ushering in a new age of space exploration. But first, they need to make sure the engine is working properly.

At 4:30 p.m. EDT on August 13, 2015, NASA conducted a developmental test firing of the rocket’s engines at its Stennis Space Center in Mississippi, and everything played out as expected.

“There are probably some people in the control centre high-fiving, because that was a very successful test.”

“The RS-25 is about the same weight and size as two F-15 jet fighter engines, yet it produces eight times more thrust. A single turbine blade the size of a quarter — and the exact number and configuration inside the pump is now considered sensitive — produces more equivalent horsepower than a Corvette ZR1 engine,” Burkey wrote. 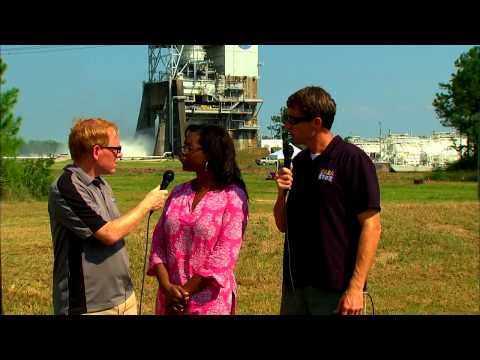 But all that strength has also been optimized in every conceivable way to ensure maximum power.