by Tibi Puiu
in Robotics, Technology
Reading Time: 2 mins read
A A
Share on FacebookShare on TwitterSubmit to Reddit 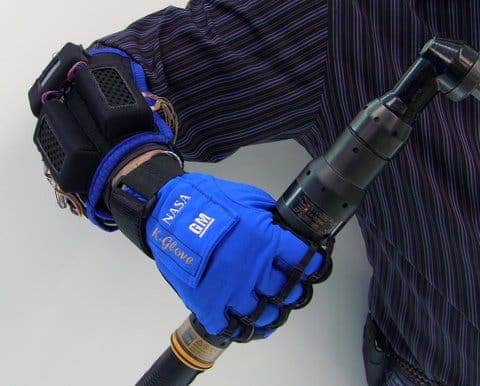 General Motors has always invested in technology which goes beyond the automotive applications for which the company is primarily known, a philosophy which I find most praise worthy, and teaming up with NASA is sure to always output performance. The latest to result from their partnership is the K-glove, a robotic glove designed to aid astronauts, as well as workers back on Earth, with streneous, repetitive tasks by granting a significant boost in force. Basically, the K-glove will offer its wearer an extra set of muscles.

Based on the Robonaut 2, a project where GM and NASA collaborated together as well, the K-glove is equipped with sensors, actuators, micro-controllers and tensors that mimic the nerves, muscles and tendons of a human hand. Sensors tell whenever the wearer is flexing his grip, like when grasping a tool, and triggers actuators placed on the upper section, which in turn activate synthetic tendons clamping down until the sensors are released. GM hopes to introduce the K-glove to workers on the assembly line.

“When fully developed, the Robo-Glove has the potential to reduce the amount of force that an auto worker would need to exert when operating a tool for an extended time or with repetitive motions,” said Dana Komin, a G.M. manufacturing engineering director.

The K-glove, though still a prototype, weighs around two pounds and is powered by a standard lithium-ion power-tool battery, mounted on a belt-clip. A third-gen prototype is already in the works, which GM claims will be lighter, smaller and consume less power when ready.