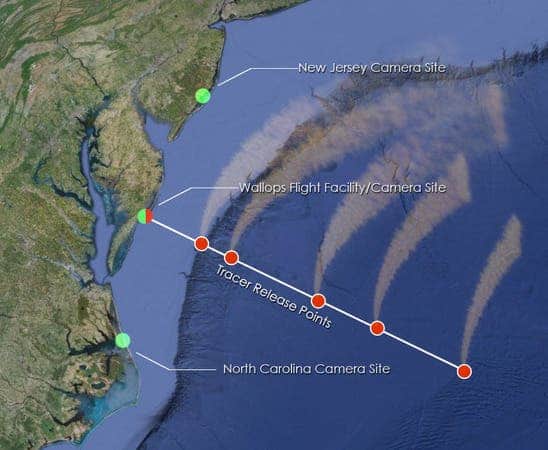 If you happen to be on the East Coast tonight, preferably between North Carolina and New Jersey, you’ll be in for a dazzling late night show. NASA will be launching five rockets consecutively in five minutes time, part of its ATREX mission, which aims to study high-altitude jet streams.

The five suborbital rockets will release chemical tracers as they sore to altitudes between 50 to 90 miles (80 to 145 kilometers), such that scientists can track high-altitude winds. Some rockets will measure conditions such as temperature and pressure near the edge of space. The tracers will create visible milky-white clouds for around 20 minutes.

“They occur in the middle of the night, and they glow,” ATREX principal investigator Miguel Larsen, of Clemson University, told reporters March 7. “It’s not extremely bright, but it’s definitely visible.”

The five launches will take place tonight between midnight and 1:30 am EDT (March 15). If you’re not in the vicinity of the launch area (it’s possible the tracers will be visible from as far as New Hampshire and Vermont), you watch the whole thing in real time on this webcast, courtesy of NASA.

Jet streams are a lot different from those you’re used to hearing about during weather forecast, which usually are found at an altitude of just 6 miles (10 km) or so. High up, close to the edge of space, jet streams blow with a phenomenal velocity, around 200 mph, some times even 300mph. Interestingly enough, theoretical computations show that high-altitude jet stream shouldn’t travel at more than 50 mph, obviously these margins are way off. This is where the ATREX mission comes in, hopefully aiding scientists to understand why these predictions are so far fetched from reality.

“The reason for doing this mission is that we really don’t understand why there are such large winds at those heights,” Larsen said.

Story and image courtesy of NASA