Scientists develop paint that can turn any surface into a battery

In today’s fast evolving world of tech, miniaturization is crucial. In most portable consumer electronics goods, like smartphones or tablets, the typical lithium-ion battery takes up quite its share of space, impending further sensible miniaturization of design. A new technique developed by scientists at Rice University might, however, render battery volume to a minimum, following the advent of a special paint, which when applied on a surface turns it into a battery.

The rechargeable  lithium ion battery paint is applied in layers, mimicking conventional battery construction comprised of five layers –  a positive and a negative current collector, a cathode, an anode and an ion-conducting separator in the middle. However, each layer is sprayed or painted on rather than pieced together, thus eliminating design restrictions.

“Paintable batteries have the capability of direct and seamless integration with objects,” Neelam Singh, lead author on the study.

Such a technique could be used to add batteries to new technologies such as solar panels, or even turn your T-shirt into a moving battery that could power tiny gadgets.

How does the spray-on battery work in practice 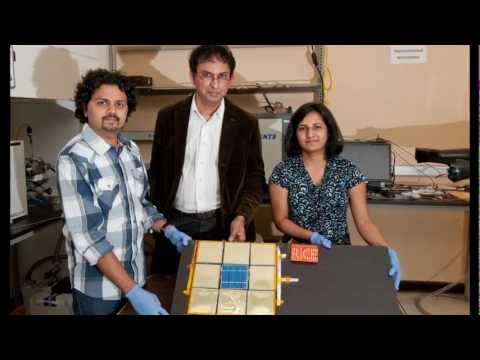 The researchers tested the adherence of the materials on different substrates by airbrushing them onto stainless steel, glass, flexible polymers, bathroom tiles and even on a beer stein. Scientists tested nine bathroom tile-based batteries in parallel, of which one was mounted with a solar cell, which generates power from a white lab light. When the batteries were completely charged by the house current and solar panel, they were able to power an array of LEDs that illuminated the word ‘RICE’ for 6 h. Moreover, the batteries delivered a constant 2.4 V.

The resulting batteries have poor life, though, of only 60 cycles and the outputted power, as you can see, is rather modest. Moreover, the scientists have to cater to some worrisome safety measures, like making the electrolyte separator layer  oxygen stable; currently there’s the possibility of an explosion if it came into contact with air.

“We have demonstrated the concept of paintable batteries, and the next step is to develop new materials for the battery that are not air- or moisture-sensitive, [and are] non-toxic and safe to handle by non-experts,” said Singh. “We are also working on developing paints for packaging the battery and making every layer, including packaging, by spray-painting technique.”

The technique, however, is still in its incipient phase, and while it may be many years away from becoming a viable, commercially available option, it demonstrates that it has the potential to revolutionize the current portable and energy-storage industry.

“Our current work is the demonstration of the paintable battery concept, but it opens up immense possibilities of integration with energy capture devices such as solar cells, as well as objects of daily use,” she said. “We think that it can be used with printed electronics, RFID or other smart objects.”

Findings were reported in the journal Scientific Reports.