Force Field Umbrella – Coming Soon, to a town near you!

It’s not Jedi technology, but it’s pretty close – scientists and students from China have devised an umbrella that eliminates the need for awkward and hard to wield umbrellas; the technology creates a force-field of air around you to shield you from the rain.

We first wrote about this technology in June 2013, when the technology was announced for the first time. In the meantime, inventors have applied for a crowdfunding campaign and they got more than enough to make sure that the product hits the shelves soon!

It’s high time an alternative to traditional umbrellas appeared, because let’s face it – umbrellas are often a drag. They’re a pain to carry all day, they turn the other way in the wind, they’re uncomfortable to walk in crowded places, they leave a big trail of water behind you… personally, I basically never use umbrellas – for those reasons. But if you could somehow make an umbrella much easier to wield… then why not?

This was the main idea behind the air umbrella. Designers from China have teamed up with postgraduate students at the Nanjing University of Aeronautics and Astronautics to create a force field umbrella which keeps you dry by creating a force field which circulates the air around you. The umbrella contains a lithium battery, a motor, and a fan, and together they work to create a continuous cycle of air that flows out from the tip. 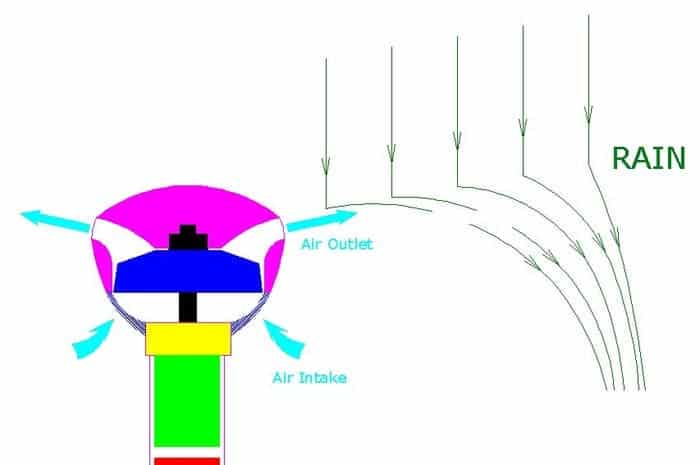 The battery time is 30 minutes – which might seem like too little, but it’s enough to get you to work or school, and you can then recharge it there. The team also says that two people can easily fit under the umbrella. The product was also designed to be sleek and attractive, and I think designers were successful in this goal.

The product will probably become publicly available by the end of 15.

All images via Kickstarter.