by Tibi Puiu
in Biology, Research, Robotics
A A 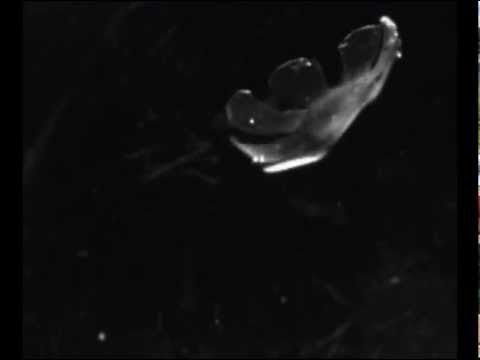 A team led by researchers at the California Institute of Technology (Caltech) and Harvard University have built this remarkable display of modern bioengineering – a completely engineered jellyfish that blends both living and non-living parts, masterfully fitted together. Called the medusoid, this cyborg jellyfish was created using silicone and muscle cells from a rat’s heart, and surprisingly, it can move and behave exactly like its living, biological counterpart, as seen in the video above.

Jellyfish are believed to be the oldest multi-organ animals in the world, possibly existing on Earth for the past 500 million years. They can swim with rhythmical contractions of the bell (muscles) that propel it with the force of the water pushed from inside the bell, sort of like jet propelling does with air jets, the action creates an equal and opposite reaction. This is very similar to how the human heart functions at a principle level, making it a viable candidate to model and analyze for tissue engineering purposes.

And Parker along with colleagues from the lab, where they work on creating artificial models of human heart tissues for regenerating organs and testing drugs, didn’t waste one moment after recognizing the jellyfish’s potential.

“It occurred to me in 2007 that we might have failed to understand the fundamental laws of muscular pumps,” says Kevin Kit Parker, Tarr Family Professor of Bioengineering and Applied Physics at Harvard and a coauthor of the study. “I started looking at marine organisms that pump to survive. Then I saw a jellyfish at the New England Aquarium, and I immediately noted both similarities and differences between how the jellyfish pumps and the human heart. The similarities help reveal what you need to do to design a bio-inspired pump.”

The scientists enlisted Caltech biotechnology researcher Janna Nawroth  for their jellyfish-emulating cause.  Nawroth performed most of the experiments, including the mapping of every cell in the bodies of juvenile moon jellies (Aurelia aurita), indispensable to understanding the animal’s propulsion system.

The team looked at an array of possible materials they could use to fashion their synthetic jellyfish; eventually they settled for a silicone polymer that makes up the body of the Medusoid into a thin membrane that resembles a small jellyfish, with eight arm-like appendage. The scientists then grew and applied  a single layer of rat heart muscle on the patterned sheet of silicone.

The medusoid was inserted in an electrically conducting container of fluid and  placed between two electrodes. The current was oscillated  from zero volts to five volts, and the medusoid began to swim with synchronized contractions that mimic those of real jellyfish.

“I was surprised that with relatively few components—a silicone base and cells that we arranged—we were able to reproduce some pretty complex swimming and feeding behaviors that you see in biological jellyfish,” says John Dabiri, a bioengineer who studies biological propulsion at the California Institute of Technology (Caltech) in Pasadena. “I’m pleasantly surprised at how close we are getting to matching the natural biological performance, but also that we’re seeing ways in which we can probably improve on that natural performance. The process of evolution missed a lot of good solutions.”

Parker says his team is taking synthetic biology to a new level. “Usually when we talk about synthetic life forms, somebody will take a living cell and put new genes in. We built an animal. It’s not just about genes, but about morphology and function.”

The team’s next goal is to design a completely self-contained system that is able to sense and actuate on its own using internal signals, as human hearts do. “You’ve got a heart drug?” says Parker. “You let me put it on my jellyfish, and I’ll tell you if it can improve the pumping.”

The findings were reported in the journal Nature Biotechnology.