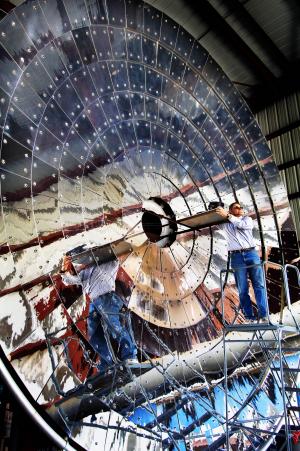 There is no need to recap the petroleum problem as just about everybody knows it and you are faced with it everyday. But scientists are trying to find other fuel alternatives and they seem to find more interesting things everyday.

The latest is using concentrated solar energy to reverse combustion. This means that we could be able to turn carbon dioxide into carbon monoxide using concentrated solar power and then it could be used to make hydrogen or serve as a building block to synthesize a liquid combustible fuel, such as methanol or even gasoline, diesel and jet fuel. The device is just a prototype and it is named Counter Rotating Ring Receiver Reactor Recuperator (CR5, for short), but it shows promising results.

CR5 inventor Rich Diver says the original idea for the device was to break down water into hydrogen and oxygen. The hydrogen could then fuel a potential hydrogen economy. Here are a few ideas about it.

“This invention, though probably a good 15 to 20 years away from being on the market, holds a real promise of being able to reduce carbon dioxide emissions while preserving options to keep using fuels we know and love,” she says. “Recycling carbon dioxide into fuels provides an attractive alternative to burying it.”

This invention is very exciting in the way that it means that it will result in fossil fuels being used at least twice, meaning less carbon dioxide being put into the atmosphere and a reduction of the rate that fossil fuels are pulled out of the ground and this prospect blends in with current gasoline and oil infrastructure. Besides building it they have showed that the chemistry works and they just have some finishing up to do.