by Mihai Andrei
in Space, Studies
Reading Time: 2 mins read
A A
Share on FacebookShare on TwitterSubmit to Reddit 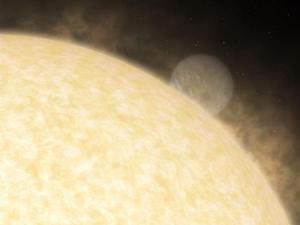 The quest for understanding planets and stars seems to be more intense than ever. Things we could not have imagined not years but months ago are proven valid today. The problem of really big planets has especially fascinated scientists for hundreds of years for numerous reasons.

A gas giant is basically a large planet that is not comprised of rock or other solid matter. Now, planetary scientists at UCL have identified the point at which a star causes the atmosphere of an orbiting gas giant to become critically unstable, as reported in this week’s Nature (December 6). These planets which are similar with Jupiter have atmospheres which are either stable and thin, or unstable and rapidly expanding. They are using 3d models to find out how they are.

Tommi Koskinen of UCL’s Physics & Astronomy Department is lead author of the paper and says: “We know that Jupiter has a thin, stable atmosphere and orbits the Sun at five Astronomical Units (AU) – or five times the distance between the Sun and the Earth. In contrast, we also know that closely orbiting exoplanets like HD209458b – which orbits about 100 times closer to its sun than Jupiter does – has a very expanded atmosphere which is boiling off into space. Our team wanted to find out at what point this change takes place, and how it happens. “Our paper shows that if you brought Jupiter inside the Earth’s orbit, to 0.16AU, it would remain Jupiter-like, with a stable atmosphere. But if you brought it just a little bit closer to the Sun, to 0.14AU, its atmosphere would suddenly start to expand, become unstable and escape. This dramatic change takes place because the cooling mechanism that we identified breaks down, leading to the atmosphere around the planet heating up uncontrollably.”

This gives us an important clue about how they evolve and this meaning that according to this study every such planet at a point in its life goes to a point where it can not return from. They form as an ice core out in the cold depths of space before migrating in towards their host star over a period of several million years. We have traveled a long way in a short amount of time when you think that just about 15 years ago we had not discovered an extrasolar planet.