by Mihai Andrei
in Geology, Studies
Reading Time: 2 mins read
A A
Share on FacebookShare on TwitterSubmit to Reddit

Starting yesterday, the whole world has been abuzz about the giant river discovered 4 kilometers beneath the Amazon, ranging from 200 to 400 km in width. 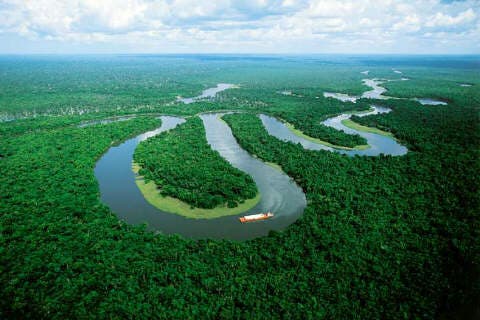 The river, named Rio Hamza, was located analyzing temperatures from 241 abandoned deep wells that were drilled in the Amazon region by the petrochemical company Petrobras in the 1970s and 1980s. The study was conducted by Elizabeth Tavares Pimentel and Valiya Hamza of the Department of Geophysics at Brazil’s National Observatory, who presented their work at the International Congress of the Society Brasiliera Geophysical in Rio de Janeiro.

The press was all over it, because at these dimensions, we would be talking about the world’s largest river – by far. However, Rio Hamza is not what you would traditionally call a river; the water is flowing through the porous rock at speeds of under 1 meter/year. Professor Hamza, after which it was named, explains:

“We have used the term ‘river’ in a more generic sense than the popular notion,” he said. “According to the lithologic sequences representative of Amazon [underground sedimentary] basins, the medium is permeable and the flow is through pores… we assume that the medium has enough permeability to allow for significant subsurface flows.”

Other geologists have met this work with criticism, some stating that this whole affair is quite dubious.

“First of all, the word ‘river’ should be burned from the work – it’s not a river whatsoever.”, said Jorge Figueiredo, a geologist with Petrobras. “But the main problem is that at depths of 4,000m, there is no possibility that we have fresh water – we have direct data that this water is saline,” said Dr Figueiredo. “My colleagues and I think this work is very arguable – we have a high level of criticism.”

According to the press, professor Hamza seems quite confident that in the nearby future he wll be able to confirm his discoveries using more direct methods. Yet again, they pretty much got it wrong.

“It is well known that geothermal methods are better suited for determining flows with [such small] velocities,” he said. “At lower velocities, experimental techniques may pose considerable difficulties.”