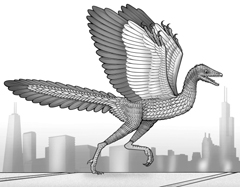 Birds evolved from lizards, (nearly) all scientists agree about that, but strangely enough there is still a debate around when the first bird showed up in the Mesozoic scene. While paleontologists who have studied fossils think that birds evolved from dinosaurs about 60 million to 65 million years ago, right when the dinosaurs went extinct, biologists who analyze DNA claim that birds appeared 100 million years ago.

“It’s a robust estimate now,” said Joseph Brown, a biology graduate student at the University of Michigan who led the study. “We know that this gap between the fossil record and the molecular data is a real gap. In the past people in both camps would just assume that the other side had gotten it wrong. But it seems now that the discrepancy is really genuine.”

The thing is that neither method of measuring the age is not completely accurate. Just because we haven’t found out fossils older than 65 million years doesn’t mean there are none and there may still be flaws in the way biologists analyze DNA.

Now they expected the gap to be caused by the fact that there is some lag between when birds’ DNA differentiated from that of dinosaurs, and when they started to look different on the outside, as measured by fossils. When DNA of a new species departs from its parent at first it’s hard to tell by just looking at the size and shape of the individual. It takes a while even after they could be differentiated by analyzing fossils. But scientists are still not convinced and so the debate is nowhere near its end.

“I think the verdict is still out,” said Julia Clarke, a paleontologist at North Carolina State University who studies the origin of birds. “While the consistency of these results is interesting, it raises questions. Maybe there’s a systematic error in genetic data.”
“I think this is far from being settled,” she said. “We need further refinements of the methods, and much larger data sets. In the next few years, large projects are reaching fruition. We’re going to see a lot of progress in answering which of the two hypotheses is correct.”

So until further evidence is pointed out, it’s hard to say who is right; in fact, they may both be right.