by Tibi Puiu
in Studies 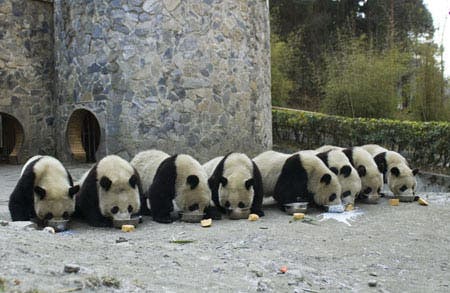 What’s maybe China’s most prominent symbol, the Giant Panda has been for decades now on the endangered species list, with an estimate wildlife population of circa. 2000-3000 individuals. Conservation efforts and breeding projects have been in the works for a very long time, efforts which even proved to render diplomatic benefits (In the late 70’s the People Republic of China loaned Pandas to American zoos, one of the first official cultural exchanges between the two countries), but only now scientists have managed to reach a breakthrough in breeding research which could finally very much lead to attempts to introduce Pandas to the wild.

In 1963 the first panda cub was born in captivity, and up to present date 300 adult giant pandas have been mated in captivity, time in which a perfect breeding was developed. This very important milestone, reached primarily by Chengdu Panda Breeding Research Centre, China, should lead to the re-introduction of the first panda in the wild within the next 15 years.

A lot of issues have been encountered by researchers during the very delicate breeding process, such as the very short breeding cycle of the giant panda – females go in heat only 72 hours a years, during which there’s only a 12 to 24 hour window when they can become pregnant. As such, a perfect knowledge of panda breeding, close supervision and daily urine samples were required. But this was only the tip of the iceberg of concerns that effected Chinese researchers. For example another issue they encountered was the pandas’ getting “turned off”! Apparently pandas weren’t too keen on getting it on when their whole habitat was comprised of 100 square feet, and even when they managed to get aroused mating partners were clumsy and didn’t know how get in the proper position, which is critical as a consequence of the male’s highly disproportionate small penis.

Intercourse? Heck, most of the time what was supposed to be a mating session turned into a brawl. As a last result, scientists turned to artificial insemination, but again because of the panda’s hectic reproductive cycle which causes pregnancies to last anytime between 11 weeks and 11 months and can remain undetected until shortly before birth, things became very complicated. Also, half of the female pandas give birth to twins but only care for one of them – in this case, a trick was employed by the Chengdu researchers, namely they cyclical swapping between cubs, one nursing, the other in the incubator, the female never telling the difference (the cub survival rate rose to 98% after this ingenious combination was implemented).

Hard work and most of all innovation finally fructified their efforts and with the goal of 300 captive pandas achieved, construction has started on the country’s first dedicated panda reintroduction facility. You can learn more about giant pandas and the Chengdu Panda Breeding Research Centre during the broadcast of Panda Makers BBC TWO at 2000 GMT, Tuesday December 7th, a documentary two years in the making.