by Mihai Andrei
in Biology, Oceanography, Studies
A A

Well, that’s a bit of a stretch, but according to scientists, this giant fossil sea creature known currently just as “Predator X” had a bite that makes T-Rex seem “feeble”. This 15 meter long dinosaur had a crushing 33,000 lbs (15 tonnes) per square inch bite force.

“With a skull that’s more than 10 feet long you’d expect the bite to be powerful but this is off the scale,” said Joern Hurum, an associate professor of vertebrate paleontology. “It’s much more powerful than T-Rex”, he added. 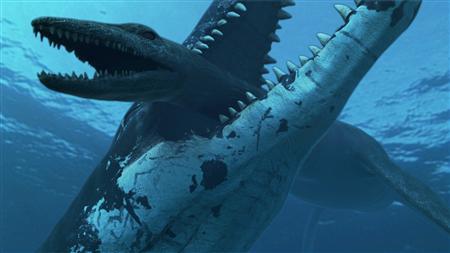 Predator X has a bite force of about 10 times bigger than any animal that lives today and more than 4 times more powerful than that of the T-Rex. The teeth of this pliosaur which belongs to a new species was about a foot long and it’s estimated that the whole animal weighed about 45 tonnes.

According to him, the bite was so powerful that it could “crush a Hummer” (actual quote). But alas, the brain was really small for this fierce predator, and it was similar in many ways to that of the great white shark. His prey consisted of squids and other marine reptiles.