Crystal That Nature May Have Missed

by Mihai Andrei
in Chemistry, Studies
A A 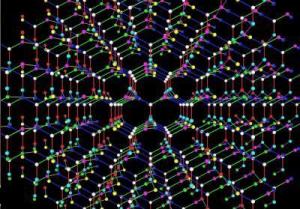 For a lot of time man kind or at least a big part of it has been absolutely fascinated with the diamond and its fantastic glimmer. The reasons which account for its stunning beauty could be uncovered by a mathematical analysis of its microscopic crystal structure. It turns out that this structure has some very special, and especially symmetric, properties. In fact, as mathematician Toshikazu Sunada explains in an article appearing in the Notices of the American Mathematical Society out of an infinite universe of mathematical crystals, only one other shares these properties with the diamond, a crystal that he calls the “K4 crystal”. It is not known whether the K4 crystal exists in nature or could be synthesized.

You can create an idealized version of a crystal by focusing on its main features, namely, the atoms and the bonds between them; an atom is going to be represented by a dot which we will call “vertices”, and the bonds are represented as lines, which we will call “edges”. Thus you can create a network of vertices and edges which is called a “graph”. A crystal is built up by starting with a building-block graph and joining together copies of itself in a periodic fashion.

There are two patterns operating in a crystal: The pattern of edges connecting vertices in the building-block graphs (that is, the pattern of bonding relations between the atoms), and the periodic pattern joining the copies of the graphs. One can create infinitely many mathematical crystals this way, by varying the graphs and by varying the way they are joined periodically. But a diamond has two characteristics which distinguish it from the others.

Out of every crystal which could be theoretically created just one shares with the diamond these two properties. Sunada calls this the K4 crystal, because it is made out of a graph called K4, which consists of 4 points, in which any two vertices are connected by an edge.

“The K4 crystal looks no less beautiful than the diamond crystal,” Sunada writes. “Its artistic structure has intrigued me for some time.”

At the moment it exists just in mathematic but creating it is not so far-fetched as you could think; it is very tempting to ask whether it might occur in nature or could be synthesized. After all The Fullerene, which has the structure of a soccer ball (technically called a truncated icosahedron), was identified as a mathematical object before it was found, in 1990, to occur in nature as the C60 molecule.