by Tibi Puiu
in Chemistry, Nanotechnology, Research, Studies
Reading Time: 2 mins read
A A
Share on FacebookShare on TwitterSubmit to Reddit 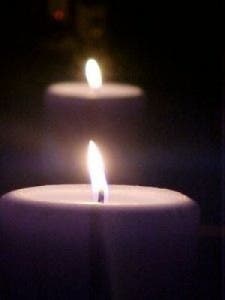 Diamonds are for a nano-second – in the glitter of a candle light, that is. In a stroke of brilliance, Professor Wuzong Zhou, Professor of Chemistry at the University of St Andrews, has found millions of diamond nano-particles in the flickering light of a simple candle.

Since its invention in China thousands of years ago, people have always been fascinated by the candle’s light, inspiring numerous thinkers with its brilliant halo. Zhou’s research has unraveled the mystery that has baffled men for all these years.

As it burns, 1.5 million diamond particles are created every second within its flame. It was already known that at the candle flame’s base hydro-carbon molecules existed, which were ultimately converted into carbon dioxide by the top of the flame. However, the process in between these two states was up to now unbeknownst to scientists.

Professor Zhou, assisted by one of his students Mr Zixue Su, used a novel sampling technique, he developed himself, was able to extract particles from within the middle of the flame for studying. Much to his surprise, he found that a candle flame contains all four known forms of carbon. The whole event is a premier success, after other failed attempts by scientists in the past. Curiously enough, Professor Zhou entered this endevour after he received a challenge from a fellow scientist in combustion.

“A colleague at another university said to me: “Of course no-one knows what a candle flame is actually made of.

“I told him I believed science could explain everything eventually, so I decided to find out,” Dr Zhou said.

As such, there were discovered diamond nanoparticles and fullerenic particles, along with graphitic and amorphous carbon. Dr. Zhou believes that his research might funnel advances towards a better understanding and manufacturing of diamonds, a critical material in the industry. Cheaper, more environmental friendly alternatives might be developed.

Dr Zhou added: “Unfortunately the diamond particles are burned away in the process, and converted into carbon dioxide, but this will change the way we view a candle flame forever.”