Back when reptiles took on dry land

by Mihai Andrei
in Geology, Studies

It was more than 300 million years ago that reptiles made tracks on earth. The exact moment when this happened is unknown, however; oh, and by exact moment, I’m talking about pinning it down to a couple million years (you gotta love geologists for their sense of time). 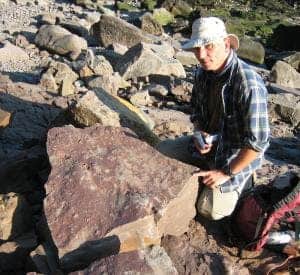 So, a discovery of fossilized footprints was recently made in the Bay of Fundy, New Brunswick, Canada. The track is 318 million years old, and it’s the oldest fossil found so far, so it’s probably very close to the “moment” I was mentioning above.

The footprints were discovered by Dr Howard Falcon-Lang of Royal Holloway, University of London. The results of his study, undertaken with Professor Mike Benton of the University of Bristol and Canadian colleagues, are published in the journal Palaeogeography, Palaeoclimatology, Palaeoecology.

It has long been suspected that it was reptiles and not their amphibian cousins that made this big leap, because amphibians need to return to the water in order to breed, while reptiles don’t. According to professor Benton:

“The footprints date from the Carboniferous Period when a single supercontinent (Pangaea) dominated the world. At first life was restricted to coastal swamps where lush rainforest existed, full of giant ferns and dragonflies. However, when reptiles came on the scene they pushed back the frontiers, conquering the dry continental interiors.”

Dr Falcon-Lang added: “The Bay of Fundy is such an amazing place to hunt for fossils. The sea-cliffs are rapidly eroding and each rock-fall reveals exciting new fossils. You just never know what will turn up next.”

So the Bay of Fundy, fossil hunting – on my to do list.