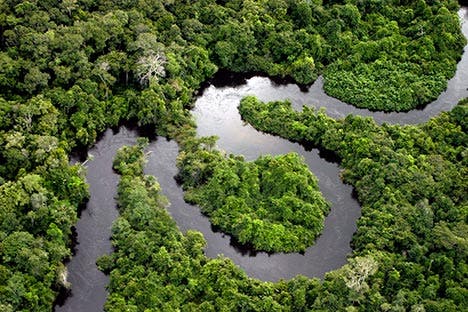 Researchers from the University of Michigan and University College London have found that trees in the Amazon forest will be able to withstand even the most dreaded of forecasted  global warming scenarios from a century from now, after they showed they’ve withstood the test of time. The researchers found that most tree species had been around for millions of years, going through climates in Earth history much more threatening then that of the present or possible in the near future. While climate change might not be a big hurdle for the Amazon rainforest, ever increasing deforestation is a grave issue.

Past studies claimed that rising global warming would cause dreaded effects on tree species across the world, which might lead to their death as temperatures rise. Christopher Dick, of the University of Michigan, and colleagues studied mutations in DNA to determine the ages of 12 widespread Amazonian tree species, including the kapok and the balsa to read their recorded history.

As they become fewer and fewer, however, the trees will have an increasingly hard time coping with climate change, since trees and plants absorb carbon. Fewer trees mean a warmer planet, and humans are certain to make their contribution. Deforestation is an increasingly pressing issue in the region. The authors recommend that a tough conservation policy should focus on preventing deforestation for agriculture and mining to preserve the Rainforest and reducing greenhouse gas emissions.

‘The past cannot be compared directly with the future.’ he said.

‘While tree species seem likely to tolerate higher air temperatures than today, the Amazon forest is being converted for agriculture and mining, and what remains is being fragmented by roads and fields.’

More research is needed though. For a lot of time, the Earth has experienced a rather cold climate. The researchers fear tolerance to warmer temperatures might have been lost along the countless generations.

“An important caveat is that because we’ve been in a cold period over the past 2 million years – basically the whole Quaternary Period – some of the trees’ adaptations to warmth tolerance may have been lost,” Dick said, adding that more research will be needed to “test whether this has occurred.”