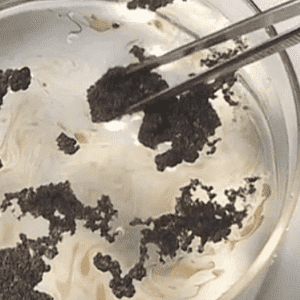 Oil spills are one of the most devastating man-made ecological disasters out there. During such an outbreak, millions of gallons of oil can end up in the ocean, killing countless marine life, as well as harming the ecosystem. Handling such disasters, beyond pointing fingers which comes to no avail to the marine life, has become a priority for scientists aware of the consequences that oil spills pose. Various ingenious solutions have been proposed, like the magnetic sop. The latest comes from Pennsylvania State University, where scientists have developed a novel polymer capable of soaking crude oil like a sponge, unleashing a chemical reaction which turns the mix into a gel. The gel floating on the surface of the ocean can then be retrieved much easier, and moreover some of the petroleum can be reused.

In light of the 2010 BP disaster in Gulf of Mexico and the 2011 Exxon oil spill in Yellowstone river,  Mike Chung at Penn State along with colleagues have been working on a solution to recover oil spills by employing polyolefin-based oil super-absorbent polymer (oil-SAP) that exhibits high oil absorption capability (up to 50 times of its weight), fast kinetics, easy recovery from water surface, and no water absorption. The researchers claim that the new oil-SAP technology will drastically lower the damaging effects of oil spills on the environment, while also providing a cost effective method for retrieving the oil spilled in oceans. Also, the gel can then be shipped to refineries where the oil can be extracted and put to use – around 19 litres of oil can be recovered from a pound of the gel material.

New Scientist has a video demo of the polymer at work, embedded below.

Hopefully, though, the polyolefin polymer will never be set to use – not because it’s impractical, instead maybe oil companies might become responsible for a change. *Sigh.