One of the most devastating oil spills 25 years later 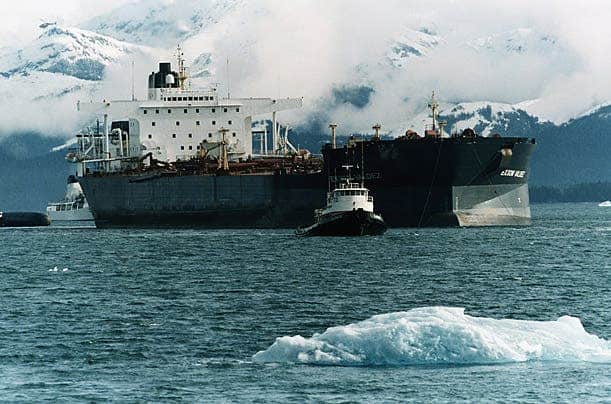 By the time the oil stopped flowing, nearly 11 million gallons had leaked out, contaminating 1,300 miles of shoreline and stretching over 470 miles from the crash site. Photo: Bettmann / Corbis

Shortly after midnight on March 24, 1989, the Exxon Valdez, a mile off-course in an attempt to avoid icebergs, ran aground on Bligh Reef in Prince William Sound, gashing its hull and releasing oil into the Pacific Ocean. Hundreds of thousands of barrels of crude oil leaked into pristine Alaskan waters – it was an environmental nightmare, one that still echoes 25 years later. For the residents of the small Cordova community, the accident lingers much deeper.

Some 2,000 sea otters, 302 harbor seals and about 250,000 seabirds died in the days immediately following the spill. In the long run, however, the spill continued to wreck havoc, both to wildlife and the local economy, destroying whole businesses. Before the spill Cordova consistently ranked in the top 10 most profitable U.S. seafood ports. A quarter century later, it’s not even in the top 25. Herring fishing was the life and blood of Cordova, but 25 years layer herring population still has yet to recover in Prince William Sound.

It took more than four summers of cleanup efforts before the effort was called off. Not all beaches were cleaned and some beaches remain oiled today. At its peak the cleanup effort included 11,000 workers, about 1,000 boats and roughly 100 airplanes and helicopters, known as Exxon’s army, navy, and air force. It is widely believed, however, that wave action from winter storms did more to clean the beaches than all the human effort involved.

Many years later, damage still linkers both the environment and to people’s hearts. It’s not only about the local economy – serious community conflicts and psychological breakdowns followed as well. This is what Liesel Ritchie, assistant director of CU-Boulder’s Natural Hazards Center, thinks. He and colleagues were part of a collaborative 24-year longitudinal study of Cordova and the impact the spill had on the local community.

“What has fostered so much stress and anxiety in the community as a whole is different science says different things,” she said. “For example, Exxon scientists say everything is fine, that the impacts were minimal to begin with and that they subsided very quickly. Then other scientists who are not being paid by Exxon have other findings. What we’re talking about here at that level then is contested science which tends to cause uncertainty and stress in populations that are receiving this information and not knowing entirely how to interpret that.”

From one direction you hear from people who say everything will be alright, while others tell you all hell is loose. A conflicting tug of war, with the Cordova community in the middle. Another huge stress factor was the exhausting litigation that finally ended in a judgment against Exxon in 2008 – almost 20 years after the spill.

During this time, some people may have developed serious internal conflicts. Even though the litigation is now finished in the people’s favor, many are disappointed in the compensation.What was once a $5 billion judgment in 1995 was reduced, through appeal to the U.S. Supreme Court, to $507 million.

“The way most people describe it was a slap in the face because although they won the judgment against Exxon, the punitive damages were just that, puny, in most of the people’s minds in Cordova,” Ritchie said. “And there were some people that were really hopeful. And those people were the hardest hit in terms of the frustration and to an extent the anger that they felt with the Supreme Court and the way things went down.”

“You know, I think one of the most important things that I would like to share that I’ve learned over the years in working with people in Cordova, Alaska, in particular, is how strong and truly resilient they are,” she said. “I’m happy to say that at this point we have turned a corner on the stress associated with the spill and the ongoing litigation. The most recent data collection this past year suggests that the level of stress has dropped in the community as a whole, which is the first time since 1989 that we’ve seen that happen.”