Smallest chameleon, just ONE inch in size, discovered in Madagascar

by Tibi Puiu
in Animals, Biology, Discoveries, Research
Reading Time: 2 mins read
A A
Share on FacebookShare on TwitterSubmit to Reddit 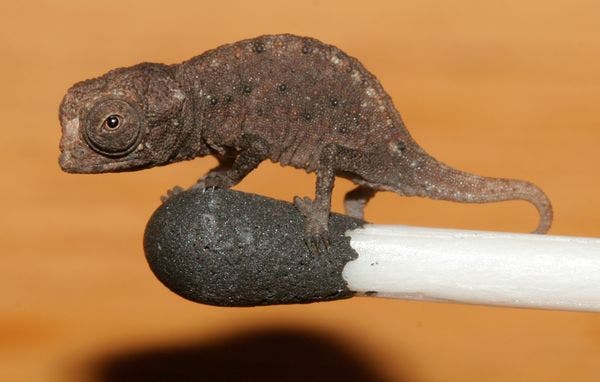 A team of German and American researchers have discovered four new species of tiny chameleons on the island of Nosy Hara, just off the northern coast of Madagascar, which considered one of the smallest reptiles known to man. Some are so small they can balance on the tip of a match.

The  four new species fall under the genus Brookesia, or  leaf chameleons as they’re commonly referred to. The smallest of the four, Brookesia micra, measures in at the adult size just 1 inch, or 2.5 centimeters.  This incredibly tiny size came as an effect of “island dwarfism”, which drives some species to become smaller and smaller to adapt and cope with its environment. When faced with limited resources (habitat) and competition, a nifty trick animals employ is to get smaller.

“During the day it is very hard to find the chameleons, because they are very tiny and don’t move very much,” Frank Glaw, scientist at the Zoological State Collection in Munich, Germany, told Reuters TV on Thursday.

“The only way, or the best way, to find them is if you go out at night with headlamps and torches, because in the dusk the chameleons climb up the small plants to sleep,” he said. 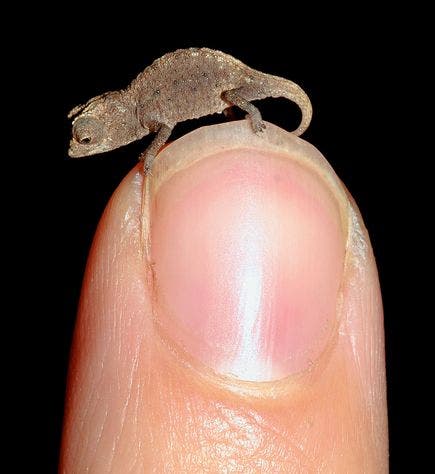 In the past, giant animals used to roam the Madagascar, however most of them have been driven extinct by humans.

“They went extinct after humans arrived, but the small animals survived,” Graw said. “Big species are vulnerable because they need big habitats and they are hunted by humans.” Small species require relatively few resources and very little space.

The researchers reported their findings in the journal PloS One.

Photos and story via National Geographic