by Mihai Andrei
in Feature Post, Research, Space
A A 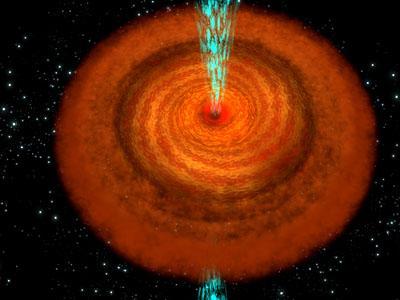 According to Murphy’s laws, all great discoveries happen by mistake. This is not the case here, but scientists had the opportunity to observe something they weren’t expecting at all. Astronomers at the University of California-Santa Cruz had the fortune of witnessing the birth of a young galaxy.

They were the first to observe the onset of a huge flow of gas from a quasar which is virtually equivalent to the very bright core of a very young and remote galaxy. The gas was expelled about 10 billion years ago and it was noticed only thanks to a sharp-eyed undergraduate.

“It was completely serendipitous,” said Fred Hamann, a UF astronomy professor. “In fact, the only way it could have happened is through serendipity.”

Quasars are actually very bright cores of young galaxies, and they contain what is called super massive black holes, which are about a billion times larger than our sun. We can see them in galaxies that are far away, and formed a very long time ago (even by geological time) and the light from them is just now reaching our planet.

The black holes are invisible but the cosmic material is not, and it also forms some disks which are the cause for the quasar’s light. But despite the fact that scientists deducted that such clouds of gas have to exist, they didn’t witness the coming into place of such a cloud. Daniel Progra, a physics professor at the University of Nevada points out how lucky this discovery is.

“I am most excited about this work,” he said. “We humans cannot directly monitor changes in quasars as they take very many years. Therefore, a discovery of a change over a few years is very interesting. It is not unexpected, but chances are very small.”

Hamann adds that this raises even more questions.

“One interesting question in astronomy is ‘how does the evolution of quasars relate to the evolution of galaxies?,’” he said. “The matter ejected from quasars might be the key to this relationship because it can disrupt or regulate the formation of galaxies around quasars. This discovery is a small piece of that story that we can see happening in real time, and what we are going to do now is keep watching.”