by Tibi Puiu
in Research, Science, Studies, Technology
A A

In the age where consumer electronic are purposely built with short lived life cycles, there might seem to be no interest for manufactures to invest in technology that enhances reliability. Sophisticated military controls or aerospace on-board circuitry are a different story though from your counter toaster – the kind of applications that yearn for working electronics that can last with confidence. With this forefront of technology in mind, scientists from University of Illinois have developed a “self-regenerating” circuit system that fills in cracks in a circuit and restores electrical conductivity within milliseconds.

Extraordinary advances in manufacturing technology and miniaturization has lead to tremendous computing power packed into tiny chips – basically the same chip density has remained in place for years and years, while its computing power doubled ever year. This, however, comes with a great deal of stress to the circuit, mostly fluctuating temperature cycles, which can produce failures, thus shutting down the circuit and, in consequence, the whole device. Repairing such an issue usually entails replacing components or the whole system all together if short-circuitry leads to propagated damage.

“In general, there’s not much avenue for manual repair,” Nancy Sottos, co-author of the papar, said. “Sometimes you just can’t get to the inside. In a multilayer integrated circuit, or battery, there’s no opening it up. Normally you just replace the whole chip or battery.”

The Illinois engineers’ system is consisted of  tiny microcapsules, just 10 microns in diameter, on top of a gold line functioning as a circuit. Whenever a tiny crack appears in the conductive material, the microcapsules break open and release the liquid contained inside, which fills in the gaps and restores electrical flow. During this operating, the circuit is inactive, but only for a mere miliseconds. Remarkably,  researchers demonstrated that 90 percent of their samples healed to 99 percent of original conductivity, even with a small amount of microcapsules.

“It simplifies the system,” said chemistry professor Jeffrey Moore, a co-author of the paper. “Rather than having to build in redundancies or to build in a sensory diagnostics system, this material is designed to take care of the problem itself.” 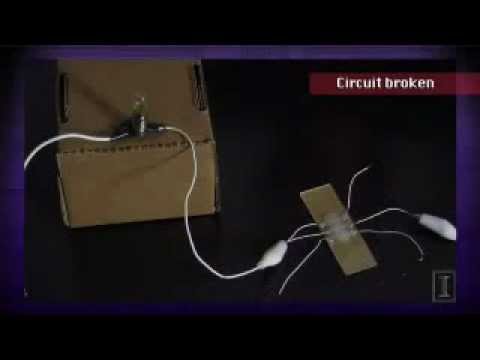 What’s remarkable about this system is not only how it takes care of this problem, but also where. The self-healing system is autonomous and localized, as the microcapsules only act upon the singular damaged points of the circuit, with no need of intervention for manual repair or diagnosis.

“In an aircraft, especially a defense-based aircraft, there are miles and miles of conductive wire,” Sottos said. “You don’t often know where the break occurs. The autonomous part is nice — it knows where it broke, even if we don’t.

The paper, titled Autonomic Restoration of Electrical Conductivity, was published in the recent edition of Advanced Materials.