by Tibi Puiu
in News, Other, Research, Robotics, Technology
A A
Share on FacebookShare on TwitterSubmit to Reddit

A freak accident left Jason Barnes without his left arm below the elbow – a disheartening matter by all means, made worse when considering he also used to be a drummer. The young man did not despair, however, and as an Atlanta Institute of Music and Media student he sought to fill in his missing arm as best as he could. He built his own prosthetic device shortly after the accident, and could  bang the drums by moving his elbow up and down. His prosthetic, however, was a cruel joke compared to his old hand which he used to bang his kit.

Georgia Tech Professor Gil Weinberg entered the scene and built an amazing robotic prosthetic for Barnes, one that essentially turned him into a cyborg drummer. How so? Well, his new arm primarily features two motors that control two drum sticks. While one of the sticks is controlled both physically by the musicians’ arms and electronically using electromyography (EMG) muscle sensors, the other is autonomous, listening to the rhythm played by the first stick, and improvising on the way. Yeah, a drummer who plays with three sticks, and the third stick has a mind of its own.

“Jason can pull the robotic stick away from the drum when he wants to be fully in control,” says Weinberg. “Or he can allow it to play on its own and be surprised and inspired by his own arm responding to his drumming.”

Besides allowing him to perform again on his kit, Barnes can now perform a couple of tricks that were impossible before he lost his arm, by virtue of brute machine force.

“Music is very time sensitive. You can hear the difference between two strokes, even if they are a few milliseconds apart,” said Weinberg. “If we are able to use machine learning from Jason’s muscles (and in future steps, from his brain activity) to determine when he intends to drum and have the stick hit at that moment, both arms can be synchronized.”

Because an embedded chip can control the speed of the drumsticks, the prosthesis can be programmed to play two sticks at a different rhythm. It can also move the sticks faster than humanly possible.

“I’ll bet a lot of metal drummers might be jealous of what I can do now,” he said. “Speed is good. Faster is always better.” 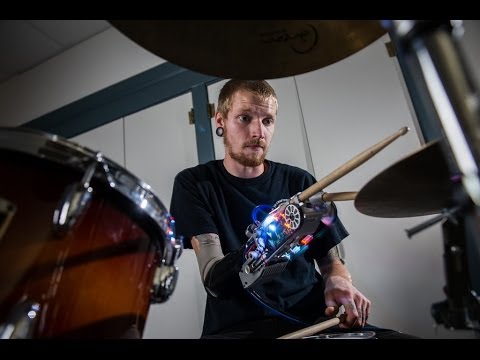