New theory suggests quantum entanglement and wormholes are linked together

by Tibi Puiu
in Physics, Research 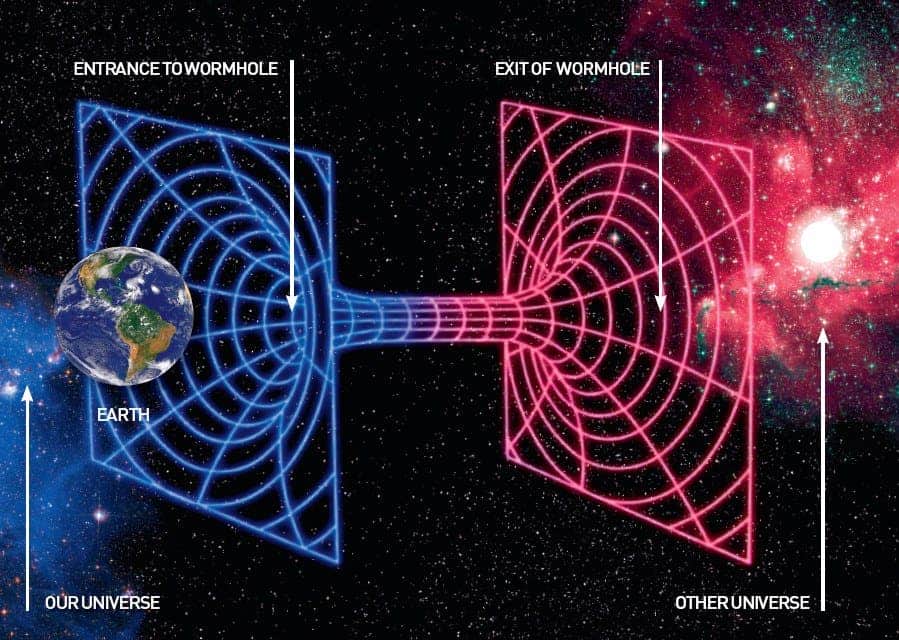 One of the predictions derived from Einsten’s theory of general relativity is the existence of wormholes – spacetime shortcuts. In theory such bridges may offer instantaneous travel between the two bridgeheads or wormholes even if these are light-years away from each other. Two independent studies suggest that there’s a link between quantum entanglement and wormholes, or to be more precise: each wormhole has a corresponding pair just like two entangled quantum particles.

Quantum entanglement is nothing short of bizarre. In a pair of entangled particles,  a change in the quantum characteristics of one of the particles can’t happen without also causing a change in the other particle, even if these particles are millions of miles away. This concomitant change happens instantaneously, which is  why some people liken it to teleportation. I know, it’s a really strange and  non-intuitive aspect of the quantum theory of matter – this is why Einstein called it “spooky action at a distance.” For what’s it worth, although quantum entanglement was first theorized a long time ago, only recently did researchers prove that it’s real.

Theoretical physicists Juan Martín Maldacena at the Institute for Advanced Study in Princeton and Leonard Susskind at Stanford University argue that wormholes are nothing but pairs of black holes entangled together. A proposed mechanism of wormhole generation would be that when a black is born, its pair is simultaneously created as well. Moreover, they conjectured that entangled particles such as electrons and photons were connected by extraordinarily tiny wormholes.

One of the biggest challenges physicists seek to address is developing a unified theory of physics, one that reconciles both general relativity and quantum mechanics. Supersymmetry is one such proposition that aims to unite the two grand theories of physics that explain the large universe (general relativity) and the tiny universe (quantum mechanics).

One huge idea expressed in this theory relates to holography or the notion that actions in this universe  may emerge from a reality with multiple dimensions; like a 2-d hologram may give the impression of 3-d object. I’d highly recommend you watch this video of Carl Sagan discussing the tesserat. Anyway, if you imagine a physical system that exists in only 3 dimensions, in theory you can describe that system using objects behaving in the four dimensions that general relativity describes the universe as having  (width, length, depth and time).

“Entangled pairs were the holographic images of a system with a wormhole,” Jensen said. Independent research from theoretical physicist Julian Sonner at the Massachusetts Institute of Technology supports this finding.

“There are certain things that get a scientist’s heart beating faster, and I think this is one of them,” Jensen told LiveScience. “One really exciting thing is that maybe, inspired by these results, we can better understand the relation between entanglement and space-time.”