by Tibi Puiu
in Mind & Brain, Psychology, Research
A A 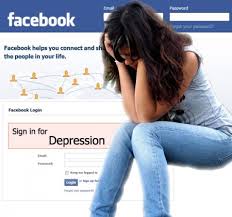 Researchers at  Charles Sturt University in New South Wales found a connection between excessive sharing of information on facebook and feeling lonely and/or depressed. This is the latest in a slew of studies that suggest the social network can cause serious emotional damage to some people.

The researchers found that 79 percent of users who describe themselves as “lonely” disclosed more personal information including their favorite books and movies, compared to less than 65 percent of other users. A survey which followed the accounts of some 600 women found that 98 percent of self-described lonely “Facebookers” shared their “relationship status” publicly on Facebook, instead of limiting that information to friends.

Scientists conclude that excessive sharing, liking and commenting can point to emotional problems and strain in real-life. This sort of findings have prompted some leading academics to acknowledge the existence of “Facebook Depression”. Basically, because some people feel pressured to meet a certain norm of standard regarding their image on facebook, those who fail to cope can fall in a depression. Other report a decline in emotional health when they are being ignored on Facebook with such people describing that they feel a less “meaningful existence” when other social media users don’t “like” or “share” their statuses and comments.

“It makes sense that the people who felt lonely would disclose this type of information,” associate professor Yeslam Al-Saggaf says. “They want to make it easier for others to initiate contact with them, which may help them overcome their feelings of loneliness.”

“For the most part I feel Facebook is a lonely experience. You don’t often see people putting out that they’re going through a hard time,” says 45-year-old former high school teacher, Rich DeNagel. “There’s a lot of social pressure to show that everything’s great. It’s a never-ending quest to be interesting and intellectual and unique, and strive to prove something to the world. You can’t just be yourself.”

Findings will appear in the July edition of the journal Computers in Human Behaviour.