by Tibi Puiu
in Other, Research, Studies
A A 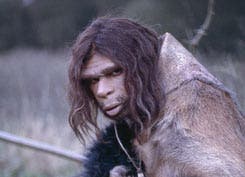 Accurate dating of a Neanderthal fossil found in a Russian cave, showed that it was 10,000 years older than previous research had suggested. The find could provide proof for the dismissal of the theory which states that Neanderthals and modern humans interacted for thousands of years.

The study leads scientists to believe that coexistence between humans and Neanderthals was minimum to nonexistent, as a time frame of only a few hundred years would seem to intertwine the two species. Previous claims state that late Neanderthals survived until 30,000 years ago in the northern Caucasus. Furthermore, it would mean that in some areas Neanderthals had become extinct before anatomically modern humans moved out of Africa.

The research was directed by the University of Oxford and University College Cork in collaboration with the Laboratory of Prehistory at St. Petersburg, Russia, centered on Mezmaiskaya Cave, a key site in the northern Caucasus within European Russia.

Neanderthals, much older than previously thought

The study was centered around the  fossil of a late Neanderthal infant from the Late Middle Paleolithic age and a series of associated animal bones. Through more accurate carbon dating than those previously made, they found that the fossil was actually 39,700 years old, which directly implies that Neanderthals did not survive at the cave site beyond this time.

“The latest dating techniques mean we can purify the collagen extracted from tiny fragments of fossil very effectively without contaminating it,” said Co-author of the paper Dr Tom Higham, Deputy Director of the Oxford Radiocarbon Accelerator Unit.

Previous dating of both fossils and artifacts have been “underestimated” in age, and data needs to be revised, improved and corrected for accurate chronologies to be privided, researchers say.

“Previously, research teams have provided younger dates which we now know are not robust, possibly because the fossil has become contaminated with more modern particles. This latest dating evidence sheds further light on the extinction dates for Neanderthals in this key region, which is seen by many as a crossroads for the movement of modern humans into the wider Russian plains. The extinction of Neanderthals here is, therefore, an indicator we think, of when that first probably happened,’ Dr. Higham said.

A Neanderthal could be brought to life through genetic efforts

In the scientific world, a complete and backed theory concerning the Neanderthal extinction is still missing, but researchers believe the species died out when the modern humans arrived or that they had already become extinct before then, possibly because of climate change, dwindling resources, or other scenarios. This latest study might provide even more data to be assessed concerning the dispersal of early modern humans, climatic events from tens of thousands of years ago and the mysterious extinction of our close forefathers.

“Many of the previous dates for late Neanderthal occupation or sites across Europe are problematic. This is simply an outcome of the fact that the association between the dated material and late Neanderthals is not always clear because we cannot always be certain whether archaeological stone tool assemblages, such as the Mousterian, that has been attributed in the case of Europe to Neanderthals, was not in some cases actually produced by modern humans. We have to directly date Neanderthal and anatomically modern human fossils to resolve this,” according to lead author Dr. Ron Pinhasi, from University College Cork.

It is considered that Neanderthals split off from the homo sapiens tree about 300,000 years ago; remarkably German scientists have already sequenced a complete Neanderthal genome, meaning,  if ethical concerns are put aside, they could bring one to life.

Dr. George Church, at Harvard, says Neanderthals could be brought back with existing technology, at a price of about $30 million.