by Tibi Puiu
in Biology, Research, Science
Reading Time: 3 mins read
A A
Share on FacebookShare on TwitterSubmit to Reddit 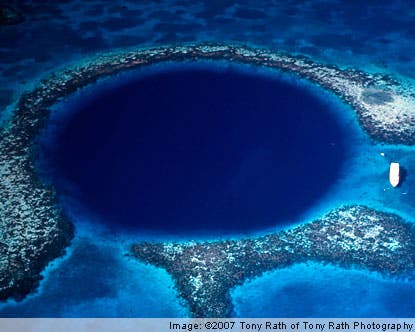 Researchers studying marine bacteria in the Bahamas’ underwater caves, have made some remarkable discoveries which allowed to understand how these organisms adapt and thrive in rather precarious conditions. Their study might help scientists understand how marine life formed for the first time millions of years in the past, as well as hint how marine life could be found on distant planets or moons, like Jupiter’s Europa which is believed to have a hot, liquid ocean of water underneath its icy, tens of kilometers thick shell.

Tom Iliffe, professor of marine biology at the Texas A&M-Galveston campus, has been studying underwater caves for the past 30 years. Throughout his career, he has explored more than 1,500 underwater caves around Australia, the Caribbean, Mediterranean and North Atlantic regions. For this present study, Iliffe and graduate student Brett Gonzalez, examined three “blue holes” in the waters of the Bahamas. They’re called like this because from an aerial view, they appear circular in shape with different shades of blue around their entraces. Around 1,000 such blue caves can be found in the Bahamas region.

In all three blue holes, the researchers found thick layers of bacteria attached to the walls of the caves, however each cave had specialized forms of such life and at different depths, suggesting that microbial life in such caves is continually adapting to changes in available light, water chemistry and food sources.

‘We examined two caves on Abaco Island and one on Andros Island,” Iliffe explains. “One on Abaco, at a depth of about 100 feet, had sheets of bacteria that were attached to the walls of the caves, almost one inch thick. Another cave on the same island had bacteria living within poisonous clouds of hydrogen sulfide at the boundary between fresh and salt water. These caves had different forms of bacteria, with the types and density changing as the light source from above grew dimmer and dimmer.

“In the cave on Andros, we expected to find something similar, but the hydrogen sulfide layer there contained different types of bacteria,” he adds. “It shows that the caves tend to have life forms that adapt to that particular habitat, and we found that some types of the bacteria could live in environments where no other forms of life could survive. This research shows how these bacteria have evolved over millions of years and have found a way to live under these extreme conditions.”

The scientists view these caves as veritable relics of the early Earth, since the bacterial life forms that inhabit them have remained more or less the same for millions of years. By studying the low oxygen and almost zero light environment, the researchers observed how each species analog to each cave adapted according to their surroundings. Iliffe discovered a few hundred new species of marine life during his career alone, and he claims that only around 5% of such caves have been explored so far. The key to understanding what first triggered life, might lye within these caves.

“We know more about the far side of the moon than we do about these caves right here on Earth,” he adds. “There is no telling what remains to be discovered in the many thousands of caves that no one has ever entered. If life exists elsewhere in our solar system, it most likely would be found in water-filled subterranean environments, perhaps equivalent to those we are studying in the Bahamas.”