by Jasmine Mitchell
in Alternative Medicine, Health & Medicine, Research
Reading Time: 2 mins read
A A
Share on FacebookShare on TwitterSubmit to Reddit

Everyone has heard of the proposed “magic” of red wine. Perhaps it is good for your heart; maybe it protects the prostate.  Despite all of these rumored benefits of red wine, few studies have actually been able to support and explain how and why red wine is so beneficial.  Recent studies have shown that the regular intake of red wine may also decrease the risk of breast cancer in premenopausal women. 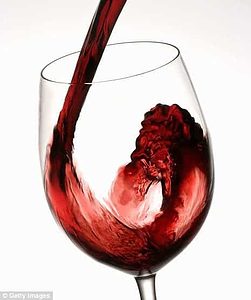 As unbelievable as this might be, there is some legitimate research behind this statement.  A study headed by Chrisandra Shufelt was performed to test the effects of red wine on estrogen levels.  Increased estrogen levels have been related to an increased incidence of breast cancer in women.  Estrogen may play a role in breast cancer development due to 1) its role in stimulating breast cell division 2) its role during the critical periods of breast growth and development, and 3) its effect on other hormones that stimulate breast cell division.

Hormone levels in 36 women averaging age 36 were tested.  Some were given red wine (2003 Cabernet Sauvignon) while others were given white (2003 Chardonnay) for the first cycle and then switched for the second cycle.  The subjects were not allowed to drink any other alcoholic beverages during the test.  They were instructed to drink 8 ounces of the assigned wine in the evening with food for 21 days.  Blood was tested during the menstruation.

Shufelt’s explanation?  Aromatase inhibitors (AIs) prevent the conversion of androgens (another sex hormone) to estrogen.  AIs have been identified in the skins and seeds of red grapes, but not in white grapes.

So the AIs present in the grapes used to make red wine inhibit the production of estrogen.  Thus, estrogen levels are lower and there is a decrease in its associated risk for breast cancer development.

The risks still have to be weighed before “Drink More Red Wine” can be considered a legitimate suggestion in the quest to prevent breast cancer.  Nevertheless, ladies (and gents… you can get breast cancer too due to increased estrogen levels) drink up.

(This is not PROVEN. This simply reflects recent scientific findings.)