Transparent solar cells could be used onto entire buildings, screens, and more

This has the potential to be the holy graal of solar energy – UCLA researchers have developed a new organic polymer that produces electricity, is nearly transparent and much more resistant than silicone.

If you think about solar cells, usually, the blacker the better – the blacker they are, the less energy is lost. But what if we could make solar panels transparent? The applications are mind boggling. Imagine buildings wrapped in solar cells, laptops, phones, and why not cars? All of these could be powered by this technology. But while the idea might not be new, the results show great promise. The breakthrough came with isolating one band of light in the spectrum.

“(A solar film) harvests light and turns it into electricity. In our case, we harvest only the infrared part,” says Professor Yang Yang at UCLA’s California Nanosystems Institute, who has headed up the research on the new photovoltaic polymer. Absorbing only the infrared light, he explains, means the material doesn’t have to be dark or black or blue, like most silicon photovoltaic panels. It can be clear. “We have developed a material that absorbs infrared and is all transparent to the visible light.” “And then we also invented a new electrode, a metal, that is also transparent. So we created a new solar cell,” Yang adds.

Polymer solar cells (PSCs) have drawn intense attention due to their advantages over competing solar cell technologies, growing in efficiency and decreasing in price. Thin-film PV currently exists that can be applied to windows, but only on windows that can be tinted – something entirely different from transparent cells.

Strictly speaking though, the cells aren’t transparent – they’re just so small you can’t see them; the new polymer incorporates silver nanowires about 0.1 microns thick (a micron is 1000 times smaller than a millimeter). The main problem here is efficiency. Isolating only the infrared specter converts 6 percent of the sun’s energy into electricity – as opposed to 11-12 percent, which is common in commercial photovoltaics. But, that can change, researchers explain.

“We have to work hard in the lab to expand the coverage of the infrared,” says Yang. “Because infrared is huge, huge energy there, and we only harvest right now less than one-third of the infrared. Our efficiency could double or almost triple in the future. There are some limitations, but we should be able to go to 10 percent in the next 3 to 5 years.” 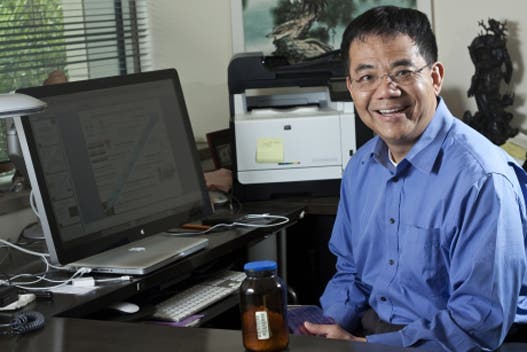 Yang also has a different, more sentimental motivation: the company that has launched the most high-profile effort to mass-manufacture photovoltaic polymers, Konarka Technologies, involved Yang’s PhD adviser, the late Sukant Tripathy. Yang hopes to fulfill his dream to bring cheap energy to places like India and China.

“I think that solar has to take a different attitude,” says Yang. “Whenever people think about solar, they think about the big silicon panels that they put on their roof, or the big solar farms that SoCal Edison builds out in the desert. But for the future of energy use, we must think about how to harvest energy whenever and wherever it is possible. If we can change the concept that energy has to come from one source, which is the power company, that the supply should not be subject to the limitations of the power grid, a lot of new things can happen.”