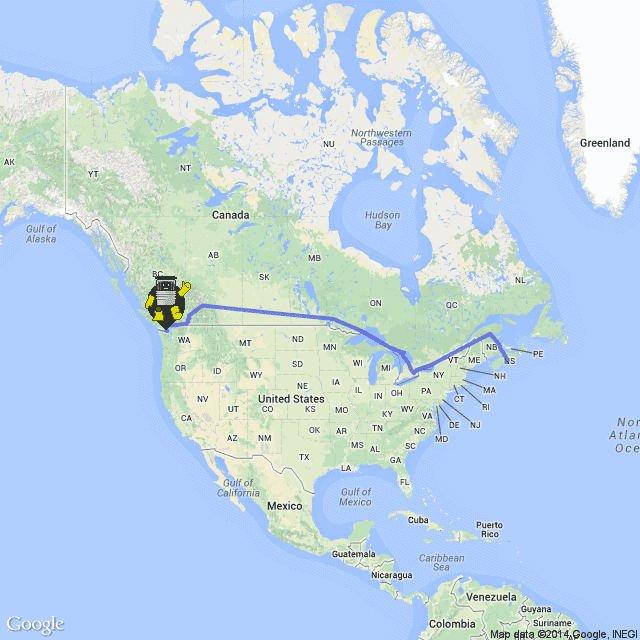 Canada’s most famous (and from what I can find, only) beer-cooler turned hitchhiking robot has finally completed its 6,000-kilometre journey across Canada, blazing rides from Halifax reaching Victoria late Saturday; and he did it with style:

I’m on a boat. Well, a ferry to be exact. Victoria, I’m on my way. #hitchBOT @BCFerries pic.twitter.com/SPewf9rIq1

In case you’re not aware, hitchBOT is a chatty, social media-savvy robot, about the size of a six-year-old child, which was made using pool noodles, an old beer cooler bucket, Wellington boots, rubber gloves, solar panels and a computerized “brain.” He was created in order to “explore topics in human-robot-interaction and to test technologies in artificial intelligence and speech recognition and processing,” according to the researchers who built him.

hitchBOT from hitchBOT on Vimeo.

“Usually, we are concerned with whether we can trust robots,” said Dr. Frauke Zeller, Assistant Professor in the School of Professional Communication at Ryerson University. “This project asks: can robots trust human beings?”​

David Harris Smith, an assistant professor at Hamilton’s McMaster University came up with the idea of constructing a hitchhiking robot. It was an incredible adventure for the bot, who was not damaged in this 6000 km (4000 mile) trip across Canada. It depended only on the kindness of strangers to get from one place to another, no outside help from the team. HitchBOT is equipped with a GPS and 3G wireless connectivity that allows it to post frequent updates of its position on the internet. It’s not clear what the robot is up to now, but it’s probably a well deserved rest:

“I need to recharge, hitchhiking is tough,” it tweeted.

Along its astonishing journey, hitchBOT visited a powwow at Wikwemikong in Ontario, met the world’s most famous albino groundhog, Wiarton Willie, grooved to the Harlem Shake in Saskatchewan and partied all night at a wedding in Golden, B.C. – all the while being managed by strangers.

You can follow any updates from hitchBOT on various social media channels:

HitchBOT is equipped with a GPS and 3G wireless connectivity that allows it to post frequent updates of its position on the internet.