We still don't know why it has happened, but we know the consequences.

In 2013, the ocean floor looked like an apocalypse had occurred. Where there had been thousands of healthy starfish days before, now lay scattered limbs and dying corpses. The disease that affected these starfish, called sea star wasting syndrome (SSWS), is still a complete mystery and is still affecting starfish off the west coast of North America. Researchers from UC Santa Cruz have surveyed the damage to starfish, all the way from California to Alaska.

The disease may be a viral pathogen, but the evidence is not conclusive. What we do know is that once affected, the starfish have lesions and their tissue decays. After just a few days, their limbs can fall off and they die. Many species were affected, although it was disaster for Pisaster ochraceus, the keystone ochre sea star. This time isn’t the first case of SSWS. It was observed in southern California in the 1970s, 80s, and 90s. What makes this event different is its sheer scale—the outbreak stretches from Baja California, Mexico to Southern Alaska.

As Melissa Miner, a researcher in the Department of Ecology and Evolutionary Biology at UC Santa Cruz who is based in Bellingham, Washington eerily recounts, “[I was observing sea stars in an intertidal zone in 2014] I went back two weeks later, and it was just death. The intertidal area was littered with stars, and probably 90 percent of them were dead or dying. We’ve been monitoring sea star populations for a long time, but this event is far broader in geographic scale than anything we’ve seen before.”

In a study recently published in PLOS ONE, the researchers analyzed monitoring data from 90 intertidal sites on the Pacific Coast between 2000 and 2016 to see how the ochre sea star was affected.

Ochre sea star populations shrank in all coastal regions, but particularly in southern California and the Channel Islands. At half of the 39 southern sites surveyed, the number of adult sea stars had declined by 99% or more. In contrast, only two sites in the north were so affected. Juvenile sea star mortality increased by about 90% after the initial outbreak of the disease. 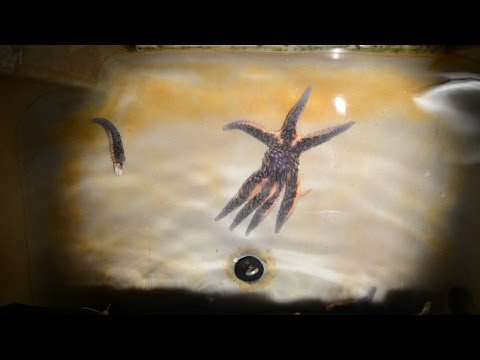 A sea star succumbing to SSWS over a period of 7 hours. Video credits: Vancouver Aquarium.

There weren’t any clues in the data for why the disease spread; water temperature and sea star density did not play a role. Since there isn’t information about why the epidemic spread, it is near impossible to find solutions. Right now, the disease is still ongoing, though the massive population crashes observed previously have leveled out.

The starfish decline could have massive impacts on the entire Pacific ecosystem. The ochre sea stars are keystone predators, which means that they are integral in maintaining the diversity of the region. They do so by eating organisms such as mussels. Without sea stars, mussels can expand and exclude other species from the environment, leading to a less biodiverse environment.

According to the results from this study, ochre sea stars from the north populations, where more juveniles are successfully making it to adulthood, could recover the quickest. The outlook isn’t as bright for southern California regions, which will likely take much longer to recover.