Scientific world buzzing around rumour that God particle has been detected

by Mihai Andrei
in Physics, Research
Reading Time: 4 mins read
A A
Share on FacebookShare on TwitterSubmit to Reddit

The world scientific community is absolutely abuzz with the rumour that the Higgs boson, the elusive God particle, may have just been detected. The rumour started after an internal note was leaked from the Large Hadron Collider (LHC); it’s not yet exactly clear if the memo is authentic, but it seems real enough to have physicists extremely excited, and awaiting confirmation.

God particle rumoured to be found

The whole fuss started with a comment at Columbia University mathematician Peter Woit’s blog, Not Even Wrong. It got pretty much the whole world excited, but some are skeptical and suspect a hoax, while others believe the memo is real, but the results are just a statistical anomaly that will dissappear upon further inspection; still, nobody can contain a “what if” feeling.

“If it were to be real, it would be really exciting,” said physicist Sheldon Stone of Syracuse University.

If it turns out to be a hoax, or just some unimportant anomaly, the researchers at CERN will have to continue their hunt for the Higgs boson, but even if it turns out to be true, their work is just beginning. They will of course have to confirm the existence of the God particle, and start understanding and interpreting its properties, as well as fit them in what is known today as the Standard Model.

Few people know that Higgs, the man who “named” the boson, wanted to name it the Goddamned particle, and not the God particle, but editors thought that just wasn’t ‘catchy’ enough. Almost as mysterious as the particle himself, Peter Higgs rarely gives interviews, despite the fact that he is one of the most admired physicists today. The particle named after him is a hypothetical massive elementary particle predicted to exist by the Standard Model of particle physics, and its existance or lack of existance will be confirmed by the Large Hadron Collider at CERN. It is, so far, the only particle in the Standard Model that hasn’t been observed so far in experiments, but also the most important, because it is believed to bestow mass to all other particles, which makes it the most wanted prize, as well as the missing puzzle piece from the model. Its importance is so great, that models without this boson are actually called the Higgsless models.

If indeed found, the Higgs boson would provide certainty of the Standard Model, and give physicists a certain ground to walk on when elaborating new theories and understanding the very universe we live in.

Hunting for the Higgs boson 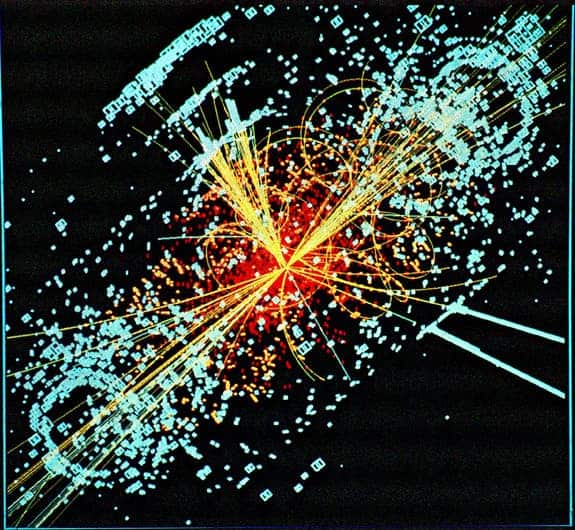 The LHC isn’t the only particle accelerator hunting for the elusive particle; the Tevatron, at Fermilab in Illinois are also trying to find this subatomic particle, as well as other bits of matter and information. What they are doing is accelerating particles to incredible speeds and then smashing them together, generating a “shower” of other particles, some of which provide insight about the Big Bang.

In this rumour, the signal seems to point out to the properties you would expect from a Higgs boson, but some of the signal is inconsistent with predictions; but that’s not bad news at all !

“Its production rate is much higher than that expected for the Higgs boson in the Standard Model,” Stone told SPACE.com in an email interview. So the signal may be evidence of some other particle, Stone added, “which in some sense would be even more interesting, or it could be the result of new physics beyond the Standard Model.”

However, speculating on these results shouldn’t be done, at least not until this is confirmed by the people at CERN. We could be dealing with one of the biggest discoveries of all times, and we’ll be waiting with our fingers crossed, just like everybody in the physics community; we’ll also keep you posted with further developments of the situation.