by Mihai Andrei
in Environmental Issues, Inventions, Research
A A 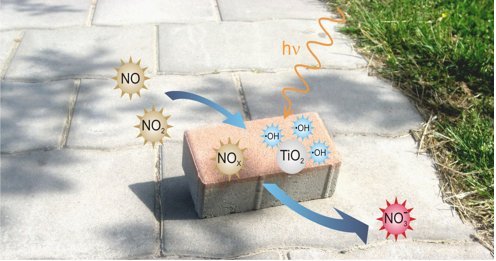 Technology has developed so much in these years that scientists are finding more and more brilliant ways to clear out the pollution that fills our lungs and to solve problems that trouble the very existence of our mankind in ways that sometimes surprise all of us. Often, for the most complex issues we have to look at mundane answers, even at the pavement from the street. The Univesity of Twente seems to have found such a fantastic answer.

The way they work is not as hard as you would probably imagine. The top layer of the concrete stones converts nitrogen oxide from exhaust fumes into harmless nitrates. Still, don’t get this wrong, that’s not nearly as easy as it sounds (and it doesn’t sound easy). What happens is that cars exhaus fumes that contain nitrogen oxides, which are the main factor for acid rains and smog. The top layer of the paving stones is made of air-purifying concrete which contains a special ingredient, called titanium dioxide.

Titanium dioxide uses sunlight to convert harmful oxides into harmless nitrates and after that the rain just washes them and cleans the street. This is based on a Japanese invention, but the Dutch University developed this technology and managed to get it to the point where it’s almost a reality. They need to test it, and after that it will definitely be put into practice.

The municipality has already created the space necessary for the tests, and everything seems to be going acording to plan. What they are going to do is they will divide a street in Hengelo into two differents parts, one with the paving stones and another without them. After that they are going to test and measurethe air quality. Also, these stones have another good part, because they always stay clean due to the fact that they repel dirt. Hopefully, this will not be the last time we will hear about these paving stones.