First vertebrates with ‘teeth’ reveal some of their secrets

by Tibi Puiu
in Animals, Discoveries
Reading Time: 2 mins read
A A
Share on FacebookShare on TwitterSubmit to Reddit 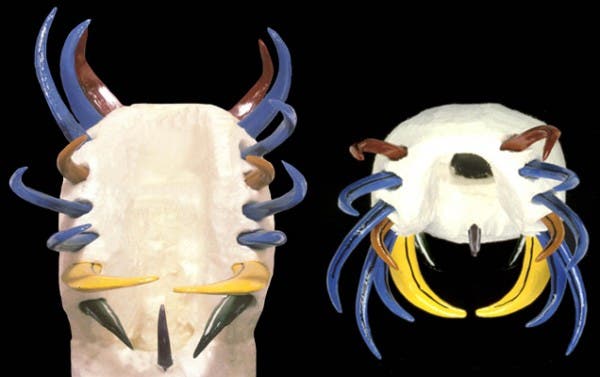 Conodonts – Greek for “having cone-shaped teeth” – are extinct chordates resembling eels, classified in the class Conodonta. These are some of the most primitive vertebrates in recorded fossil history, and are of particular interest to scientists because of their toothlike structures that lend the group its name.

For a while it had been unclear how these animals, which died off some 200 million years ago, used these tooth-like structures, until recently when researchers at University of Bristol cut through the first animal ‘teeth’ we know of. Various cross-sectional shapes of the toothlike elements of a particularly well-known species of conodont dubbed Panderodus acostatus were gathered and analyzed through a 3-D model.

Using a technique typically employed by structural engineers use to analyze steel I-beams that form the skeletons of high rises, the researchers studied how the various structures of P. acostatus teeth behave. They found that some of the teeth-like structures anchored in the conodont’s soft tissues (the animals did not have any jawbone) had a circular cross-section ( blue, green, and gray elements) offering great resistance to bending and twisting forces. This means that this particular set of teeth were more likely used to capture and restrain prey.

Other teeth structures  had a narrow, bladelike shape or sharp cusps (red, orange, and yellow), which tells us they may have been used to pierce or cut prey into smaller pieces once they’ve been captured. These assumptions are still rather speculative and  analyses of other conodont species will be required to shed more light on the subject. Nevertheless, it’s always interesting find out more about amazing ancient species and proto-animals.

The findings were documented in a paper published in the journal Proceedings of the Royal Society B.