by Tibi Puiu
in Health & Medicine, Research, Robotics
Reading Time: 2 mins read
A A
Share on FacebookShare on TwitterSubmit to Reddit 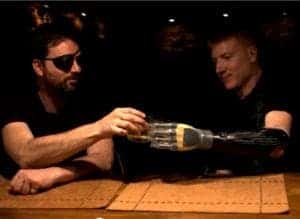 Biomechanics has come a long way during the past few decades, on trend with the exponential growth of CPUs and electronics, in general. Articulated limbs or artificial optic units are just a few of today’s options that individuals with various impairments and disabilities can use to make their lives closer to normal. Limitations exist of course, but they’re only imposed by technology which is constantly growing at an exponential rate.

Deus Ex: Human Revolution is the most exiting video game to come out in a long time, impressing through gameplay, graphics and story line. The setting of Deus Ex is that of a 2027 dystopian Earth where the world is dominated by corporations and humans are addicted to cyborg components and upgrades provided by them. The cyborgs in the video game Deus Ex, half-human/half machine, are capable of extraordinary things once with they’re new found biomechanical upgrades. But how far are we today from Deus Ex’s extraordinary cyborg concepts?

I’m pretty sure some of you will be extremely surprised by the level of technology and capabilities cybernetic modifications is at in present day. Rob Spence, a present day cyborg and filmmaker known as the Eyeborg, worked with Square Enix to shoot an incredible documentary which references today’s fast paced cyborg industry.

Left without an eye after a dreadful shotgun accident, Spence now has a biomechanical eye implant made. In the documentary, Spence, the perfect host, speaks to other extremely interesting persons who’ve had various modifications. As scientists and engineers work to bring these mechanical modifications to replace the natural missing part, whether it’s a leg, arm, eye, whatever, the temptation to actually bring enhancements and improvements is there. When confronted with the possibility of upgrading your current physical and even intellectual abilities via cybernetic implants, a lot of people might be compelled to opt for them.

The premise is there for a real Deus Ex world in the future, hopefully without the downfalls. Spence explores all these exiting concepts in his documentary, Deus Ex: The Eyeborg Documentary, which can be viewed in its entirety right below.  This is recommended viewing.