Bee venom could be used to detect explosives and pesticides

by Tibi Puiu
in Research, Science
Reading Time: 2 mins read
A A
Share on FacebookShare on TwitterSubmit to Reddit 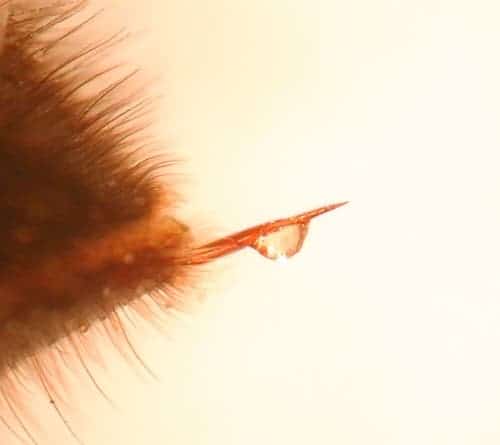 A remarkable MIT research has found that by coating carbon nano-tubes with bee venom they can create incredibly faithful sensor detectors for explosives,  such as TNT, as well as at least two different types of pesticides.

The find came after MIT chemists, lead by Michael Strano, coated one-atom-thick tubes of carbon with protein fragments found in bee venom saw that the compound reacts with explosives. Not only this, the resulting sensors are actually hypersenstive to the explosives, in terms that each sensor can detect explosives on a molecular level. Also the sensor can also detect the chemical molecules of the explosives as they break down, which could provide experts with a foot print for each explosive and a better assesement of an explosion site.

“When it wraps around a small wire, that allows it to recognize ‘nitro-aromatics’,” Strano explains, the chemical class of explosives like TNT. That wire is a carbon nanotube, a mere one atom thick.

Its applications aren’t limited to explosives either, as the researchers found that the coated nanotubes can also detect two pesticides that contain nitro-aromatic compounds. Meaning that the bee venom detector could be applied in fields from military, to airport security, to agriculture.

Strano has filed for a patent on the sensor, while the team is still working out a compression system to ensure that any molecules in the air come into contact with the tubes and are therefore detected – an indispensable system. A commercial product of this bee venom derived sensor could very much prove to be successful, if it holds up to its claims and proves to be flawlessly reliable, as it is needed in explosive detection.

Strano and his team published their work Tuesday in the Proceedings of the National Academy of Sciences.