by Tibi Puiu
in Animals, Discoveries, Research
Reading Time: 3 mins read
A A
Share on FacebookShare on TwitterSubmit to Reddit

A team of researchers at Penn State University has identified 24 new species of skinks, a subspecies of lizards, native to the Caribbean Islands, turning the region’s fauna from one of the smallest lizard groups in the world to one of the largest. However, half of these new species are considered already extinct or very close to extinction, while the other half is threatened by extinction. The scientists blame the mongoose for Caribbean skink holocaust, a predatory mammal introduced by farmers to control rats in sugarcane fields during the late 19th century. 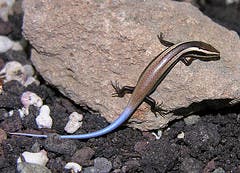 About 130 new species of reptiles are added each year to the world species count, however this was the first time since the 1800s when more than 20 new species had been added and described in a single paper. In total, the Penn State scientists looked at 39 skink species, of which six were already recognized, nine had already been described and given names but were considered invalid until now, and the rest are absolutely new species. Why did it take so long for these many skink species to be identified by scientists when the region is booming with humans and numerous scientific expeditions? The scientists explain that first of all, because of the dwindling number of surviving specimens, the newly found skink species are elusive and rarely seen, and secondly, the variations between species are very subtle and hard to notice, hence it’s very common to believe a specimen is part of an already well known species, when in fact it might be part of an entirely unidentified species. Some of the new species are six times larger in body size than other species in the new fauna.

“Now, one of the smallest groups of lizards in this region of the world has become one of the largest groups,” Hedges said. “We were completely surprised to find what amounts to a new fauna, with co-occurring species and different ecological types.”

The team of researchers, lead by Blair Hedges, professor of biology at Penn State University, used DNA sequences to identify the new animal species, but most of the taxonomic information, such as counts and shapes of scales, came from examination of the animals themselves either of museum specimens or live ones.

Not your ordinary backyard gecko

It’s believed the Caribbean skinks surfaced in the region some 18 million years ago after  from Africa by floating on mats of vegetation. That may be impressive, however what makes these reptiles truly special is the fact that females  produce a human-like placenta, which is an organ that directly connects the growing offspring to the maternal tissues that provide nutrients.

“While there are other lizards that give live birth, only a fraction of the lizards known as skinks make a placenta and gestate offspring for up to one year,” Hedges said.

This lengthy gestation period also gave their predators a hefty advantage, as gestation females are considerably slower and easier to catch.

“The mongoose is the predator we believe is responsible for many of the species’ close-to-extinction status in the Caribbean,” Hedges said. “Our data show that the mongoose, which was introduced from India in 1872 and spread around the islands over the next three decades, has nearly exterminated this entire reptile fauna, which had gone largely unnoticed by scientists and conservationists until now.”

“By 1900, less than 50 percent of those mongoose islands still had their skinks, and the loss has continued to this day,” Hedges said.

The research team reports on the newly discovered skinks in a 245-page article published today (April 30) in the journal Zootaxa.